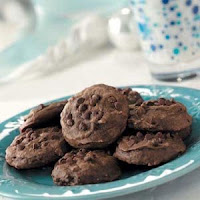 Chocolate even. Of course, I can't really show them but heck it's the thought that counts. I got cookies here and you don't. Just imagine me sitting here nibbling away while talking with my mouth full as you sit there wanting to eat my cookies. Aha!

So I was thinking, I'm not so much into the "blogging" loop anymore. Never really been to begin with but still I've managed to pick up some interesting reads along the way. I haven't really had time to really explore all the new or old blogs that could be interesting however. So, perhaps there are a few blogs that you've run into in the last few months that you'd like to see linked here in the next (or, one of the next) posts. Perhaps you even own one yourself? Just leave a comment and I'll have a look when there's time.

No not a bare butt. A Bear. RAWR!
Or a cat. Prrr. Whichever. Druids are pretty versatile. Healer died? Jump to caster form and help out keeping the tank up. Tank down? Go bearform and taunt. Then pray you get heals.... heh.

I never really got the point of that "durid spaek", it's a misshaped form of lolcat I guess...

Anyway, I got him to level 80 sometime this week. 16 / feb even. And he's been flying about mining and collecting herbs since. Even one messy Naxx for a few bosses. Which showed he was still pretty fresh and wet from the recent paint job. More on that later anyway, he needs gear, and I need to figure out what a good druid (cat) DPS rotation is.

The rogue is still my main though, no worries.

Ulduar on the PTR soon(ish), but you knew this already. If not, what stone have you been under? Check out the "official" preview later I guess.

There will be 14 bosses, 11 of which feature a "hard" mode much like Sartharion - the black dragon in Obsidian Sanctum. Hard mode bosses will give you extra challenges and loot if defeated in that manner.

Keep an eye on it, there's also going to be a good lot of class changes and above all Dual spec being added!

Dual spec allows players who are level 80 to train two sets of talents. Your glyphs and button bars will also be saved as you switch. Switching itself requires a Scribe to summon a book which you can then click and use to switch. Basically this means you: A) Need to be out of combat. B) Need a minimum of 2 other players with you to make use of it. So, no soloing and switching specs while grinding.

Yeah, those headphones work just fine, except.... the microphone. Whether it's the piece of crap we know as vista, or just bad drivers I'm not sure yet... But it's certainly pissing me off!

Poll results, what are your thoughts on Wintergrasp?