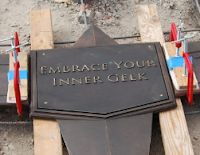 Some awesome pictures of one of Blizzards's buildings joystiq. Some impressive shots over at that site, showing the belly of one of Blizzard's buildings. Not to mention the awesome orc outside there. There's also a couple more pictures over at tweakers, but that's in dutch so you'll need to fill in that URL into google translate. Legendary You're no doubt aware of the latest legendary called Val'anyr, Hammer of Ancient Kings. With it's ilvl 239. Whether by design, or "design" after voracious whining on the forums that the item's isn't good enough anymore in patch 3.2 when all the items will be ilvl 245 and 252... No way to tell. Either way mmoc lists that the item will be upgraded to a better lifetime with the coming patches and has been upgraded to ilvl 245. Something that's never been done to legendaries in the past. Thunderfury or Sulfuras just to name a few weren't upgraded when BWL was released, or TAQ, or Naxx 1.x. Neither were the Warglaives when the sunwell was released. Strange things. Banner Somnio on the MMOC forums has started a thread offering his photoshop skillz. The queue already seems to be bigger than he can handle as more and more people join in and scream for more. He's put together some interesting stuff however, even a banner for this very blog! You can see it here (for the time being). I'll put it into the overhead space later, need to tweak the file size a bit still. Google doesn't like me using too much bandwidth xD Another interesting issue, is that pages.google.com is aparently going to be moved to yourname.googlepage.com I'm not sure how this will affect some of the images I'm using in the long term, but for now they seem fine. Just keep an eye on this...
at July 11, 2009

hey great blog you've got here! keep it up!