People do not like change. Especially when it is forced upon you. The microwave exploding, tv not working, your computer breaking down, or your house getting sucked down a landslide. Theoretically speaking of course. Or this country's planned VAT change from 19% to 21%, wtf seriously.

More recently and more relevant, Diablo 3's Attack speed Nerf which pretty much crippled a lot of players who were progressing in Inferno.

And then there's Microsoft Windows 8, which looks to be getting rid of the classic START button altogether... Or Blogger's new interface. Sure you won't notice much of that, but adding a new post suddenly got really akward.


But, that ain't stopping me from making a post here so and then ^,^ Just not much to say about World of Warcraft anymore, as I've been "clean" for a year and a bit now according to my battle.net account. The upcoming "Pandaria" expansion is looking like a turn for the younger generation of gamers, so, It seems myself and a large number of others have simply outgrown that game.

Funny enough, there are some games you never outgrow, or just look back at with a fond eye more and more. Nostalgia is weird like that. Sometimes it's best to leave such things where they belong - in the past, other times it's totally awesome to dig up some things and simply enjoy them again for old time's sake.

Such as this lovely game called Logical:


Now, some rare few of you reading this might be aware of an earlier post where I mentioned "Firemonkey". Playing around with it, it seems you can import a 3d mesh into the environment. You can rotate on click, add lights, pan the camera and so much more. So, digging around google I found that Delgine is able to produce .Dae and .Obj files which so happen to be supported by this, in theory. I haven't got it properly working yet, but I hope to, eventually. I've done some 3d Model-making for Quake 1 in the past, but this thing is quite a bit different from what I'm used to.

No promises, obviously, my attention span is notoriously short when something doesn't work the way I expect it to (As some ex guild members can testify to)... But a little something fun to get you speculating. Compare it to the above. 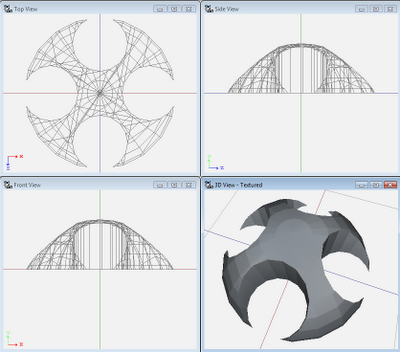 Well, if you wish to try the original game out yourself, you can do so!
There's WinUAE, and you shouldn't have a too hard time finding the Lua file to go with it. Alternatively there's a modern Html5 version made called Orbium. It works really well and seems to have a bunch of the original levels. Alternatively there's a download called Pathological, it's somewhat different though, but should still give you a good impression. There's also an android phone version it seems, but I tried it earlier and... it crashed.