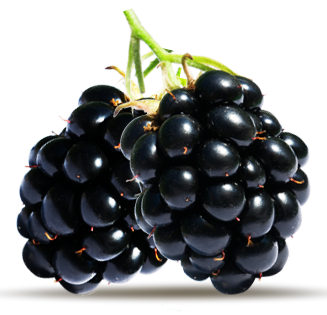 Blackberry, a word with multiple meanings in the current day world. Sadly the better one is slightly forgotten, but as it happens these puppies grow by the thousands near where I live.

It was weekend, the sun was up, I needed something tasty and healthy for dessert. So heck, grab a long stick (broomstick) and hammer a decent size nail or two into it. Grab a bucket or leftover ice cream container and you're good to go! 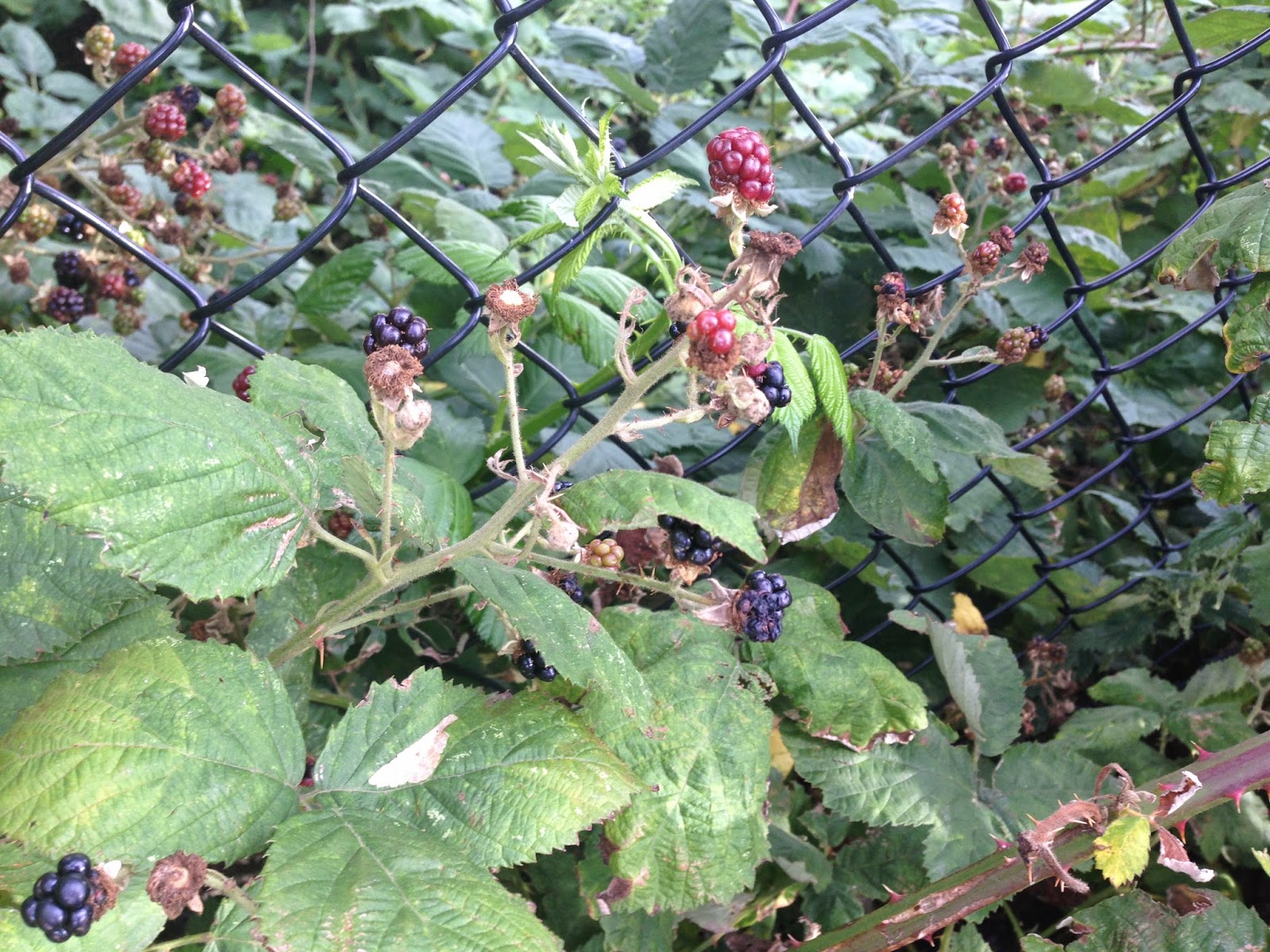 It took just 15 minutes and a few scratches along my arms. (These are the wild and thorny kind unfortunately) But either way, these little suckers had a date with my blender today.

Now, since I had a ton of these things we're going to be making something interesting with them. First of all Smoothies! And secondly, some syrup which will go nicely on some vanilla ice cream later tonight. You know you want to try it, and you know you won't be getting any from me. So be prepared to pick and make your own ;) 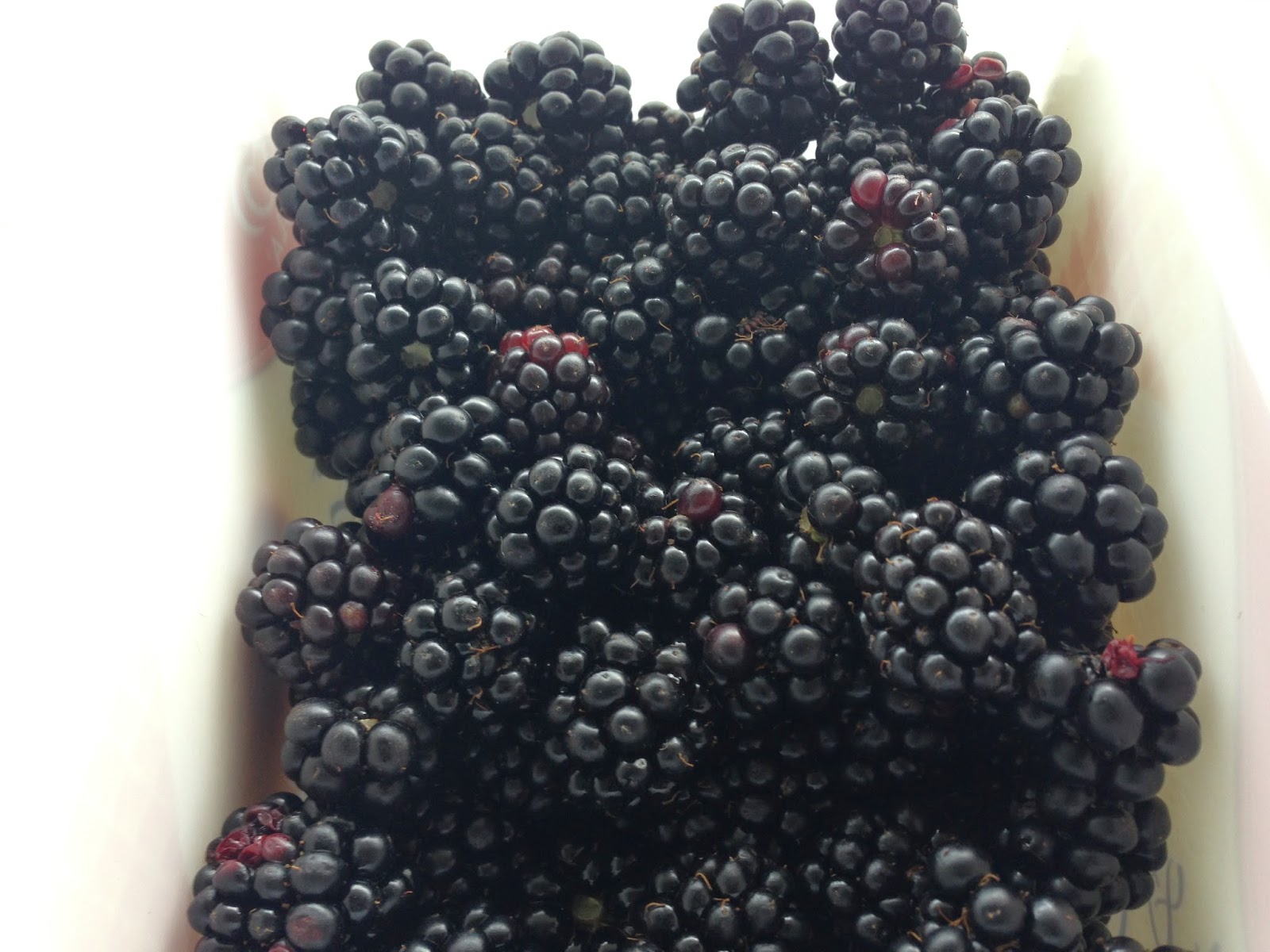 Before starting it should be said that you need to wear your finest white shirt for this, and preferably need to wear it tomorrow. Blackberries are notoriously colorful and the effect on your shirt will surely impress everyone you know for many weeks to come!

Step 1 should be obvious to everyone but it still pays to explain why it's here. I just picked a whole bunch of fruit from the (cough) wild and unspoiled countryside. (Or rather a big bush near a bicycle path) There will be spiders, bugs, snails, and birds all over and who knows what they did on or near the berries. 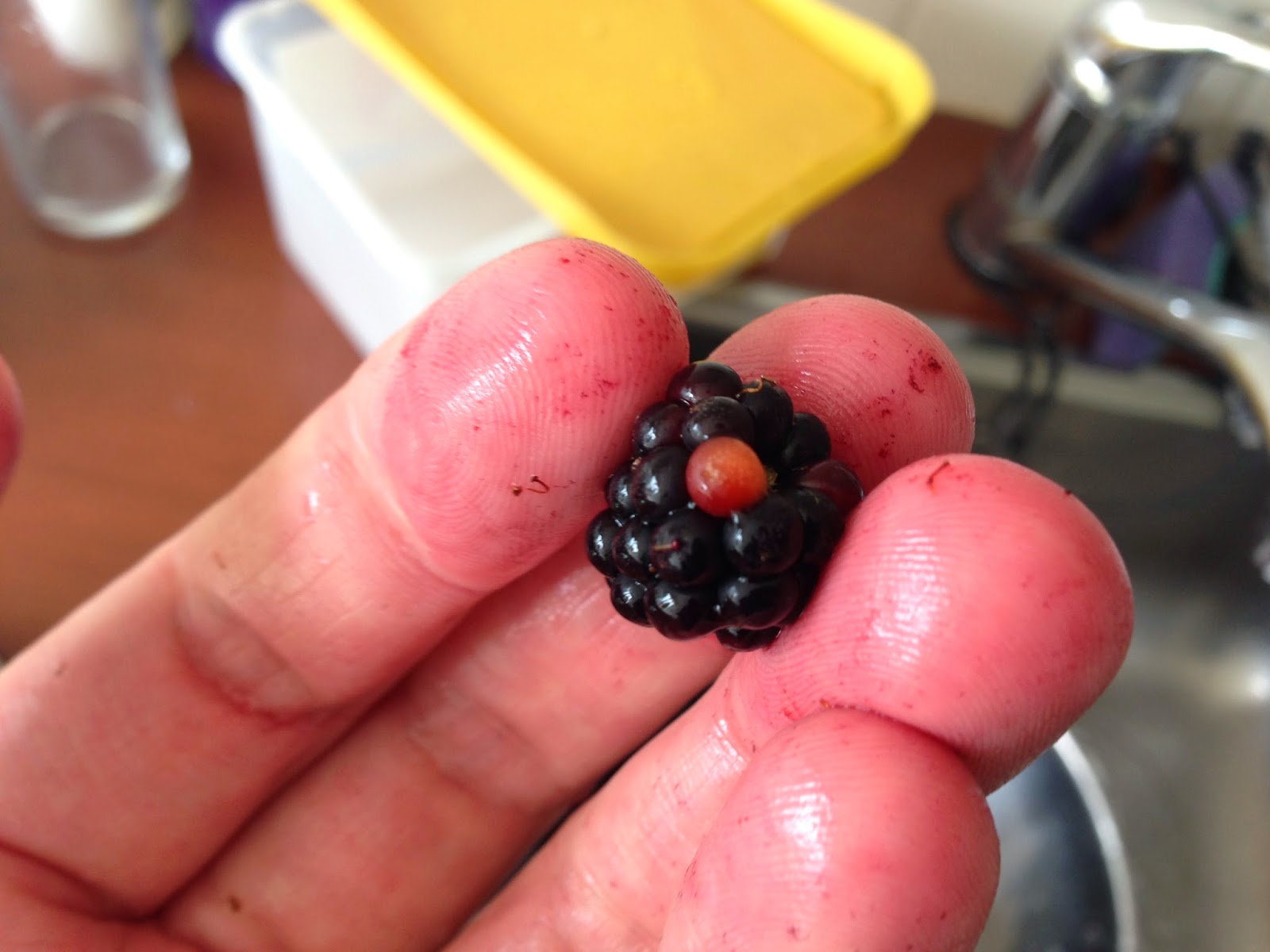 While picking it's important to leave behind the obviously bad ones, e.g. green, red, purple and furry shriveled ones. The juicy black ones you end up taking home will on occassion have a red in there, just pick out that tiny grain of red or white as it'll be sour and will increase the acidity of your end result. Pick out and clean up to improve the quality of the end result and dump them into a sifter of some form or another then splash with plenty of water. I'd recommend not using the direct water from the tap but instead have the water hit like a lid and then use that to direct the water onto the berries. This way you'll prevent crushing the berries and spilling some of the juice you want. 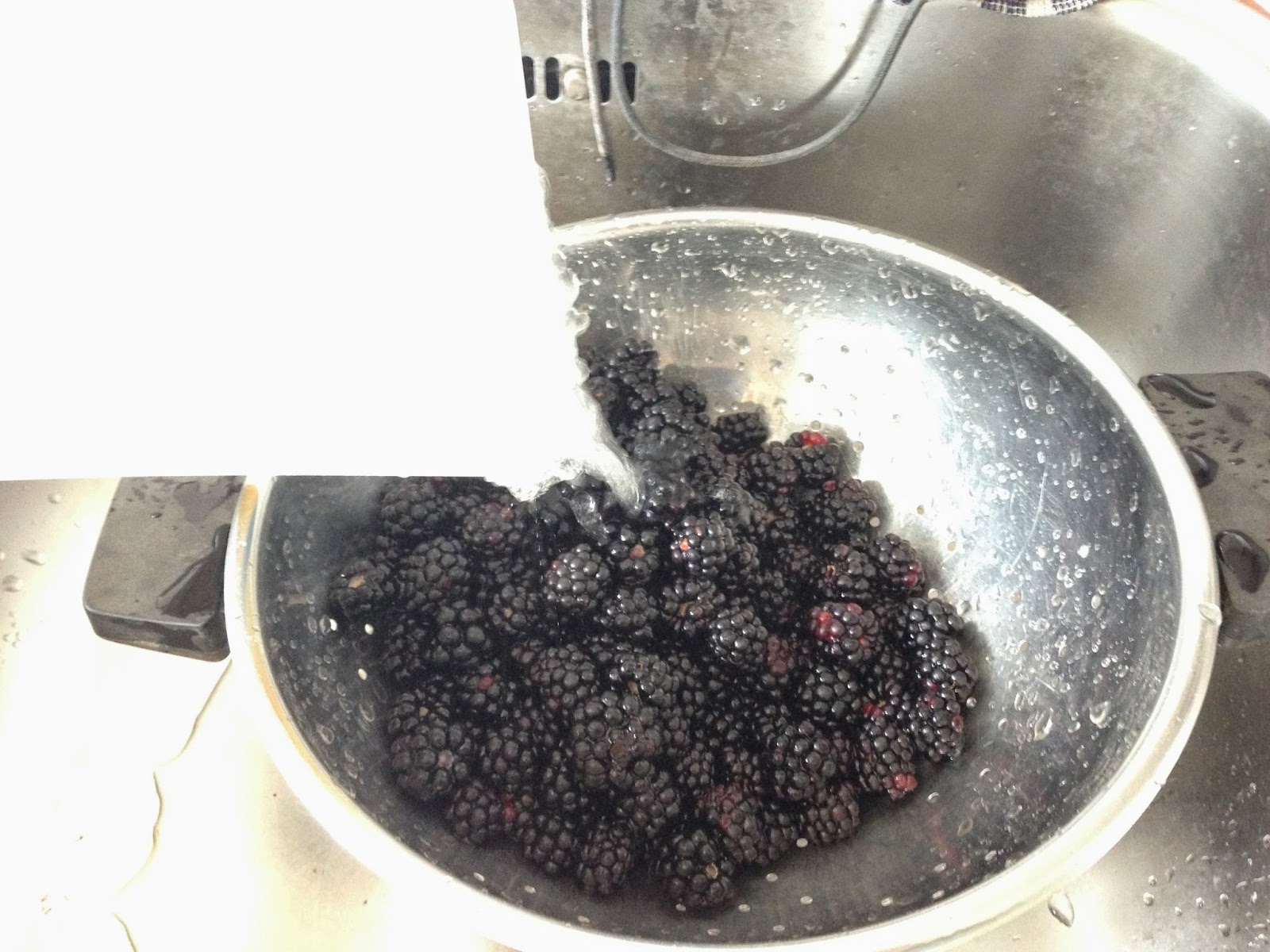 In case you were wondering, step 1 was "wash those things", because they are dirty. 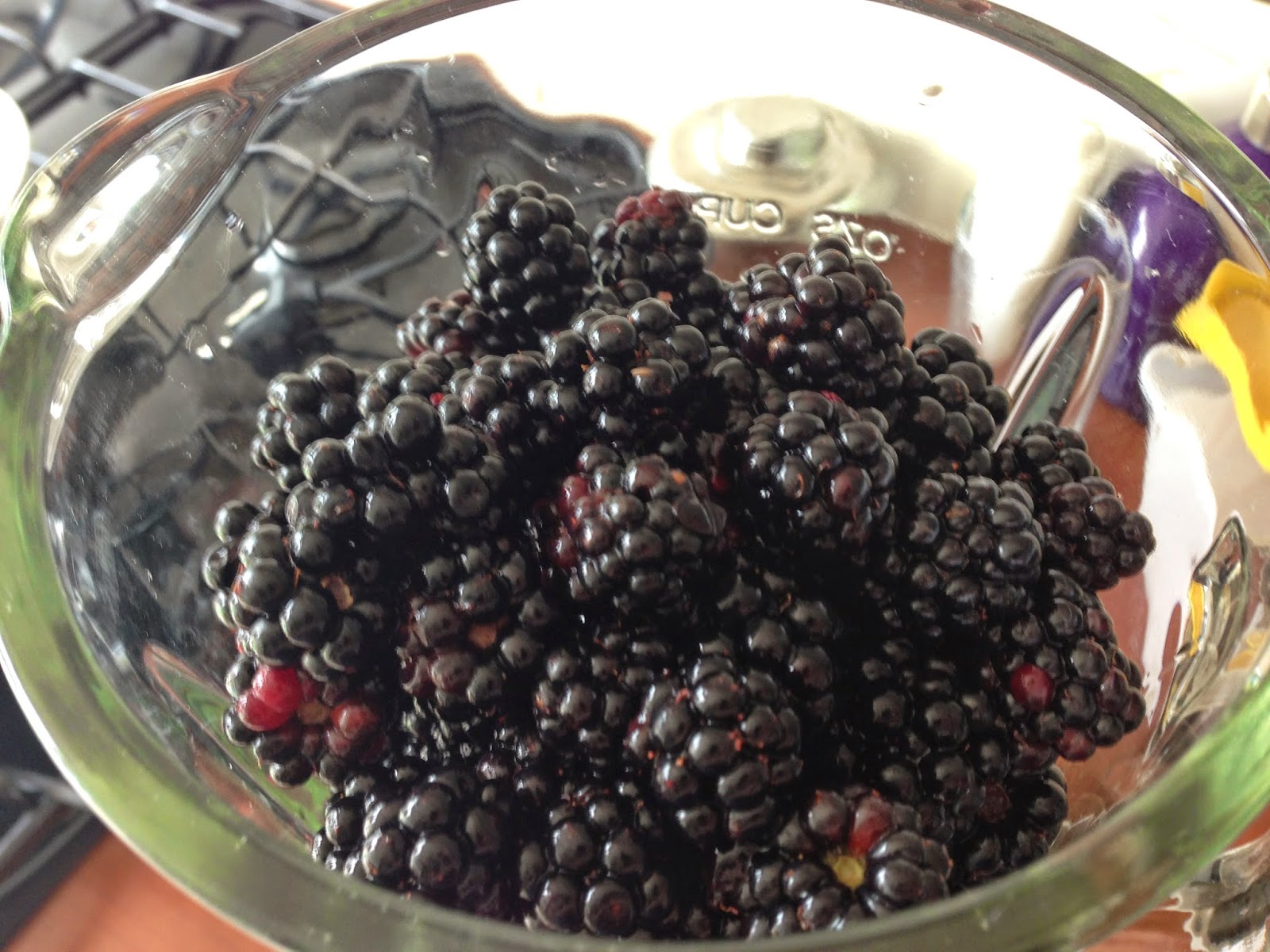 Step 2 is abusing them to death, and in case you were wondering, does it blend? Yes it does.

Blend them for a minute or two (depending on your blender) until you get a nice consistent and very colorful slurry. In case you are tempted to add sugar at this point already - don't. You'll lose some of the sugar in step 3 otherwise. 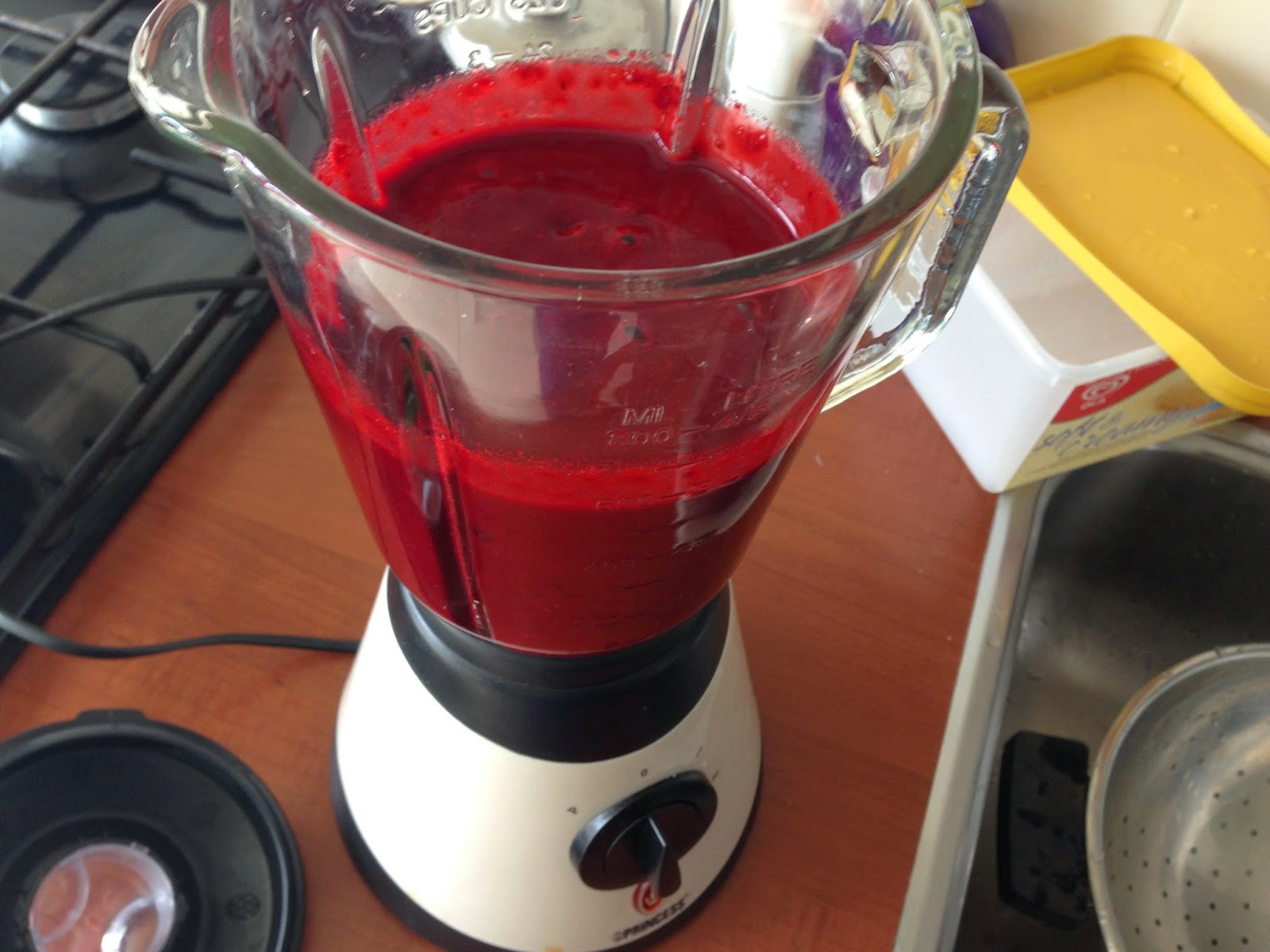 Obviously I'm not intentionally advertising either Princess or Ola in this picture on the right, since they aren't paying me for writing this. Unfortunately... But I'm too lazy to blur out their icons. If that's a problem for anyone - just don't click the picture, hah! 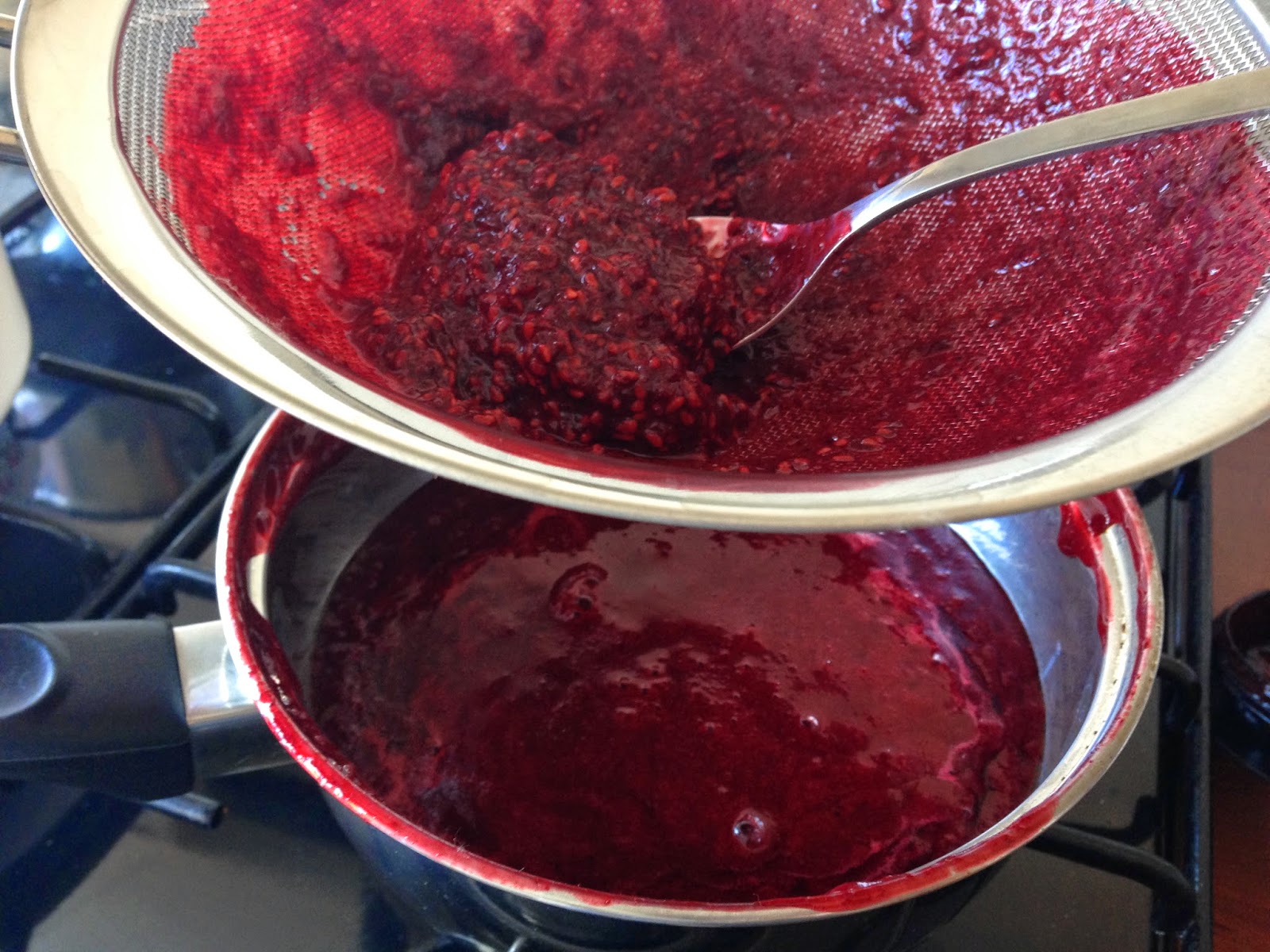 Step 3 is optional, though I recommend doing it since drinking the juice like this is going to have the effect of you eating as many berries "and seeds". The homan body is not capable of processing seeds, at all. Meaning you'll get constipated like something bad if you plan to make a habbit of this, or eat a lof of them in a short period of time. To fix this potential problem you need to find an empty pot and a sifter with small holes. If you don't have a sifter then an old rag (clean and washed obviously) will do the trick as well. Keep scraping the seeds from the bottom using a spoon to ensure the liquid can keep flowing. Lightly tap the sifter on the sides of the pan/pot or your knuckles to speed up the draining process. The leftover goo can be thrown away, or used to take revenge on someone with a lovely white shirt.

Now comes the interesting part. What do you want to make from the filtered slurry? For now I'll give you two options, though a little creativity goes a long way. I'm sure somebody will figure out a way to mix this into a cake somehow.

Step 4 should be done a.s.a.p. because you'll spend most of the day cleaning after yourself otherwise. Rince everything you don't need anymore with water, or at least put water into it. If fruit juice dries up it gets remarkably hard to remove. 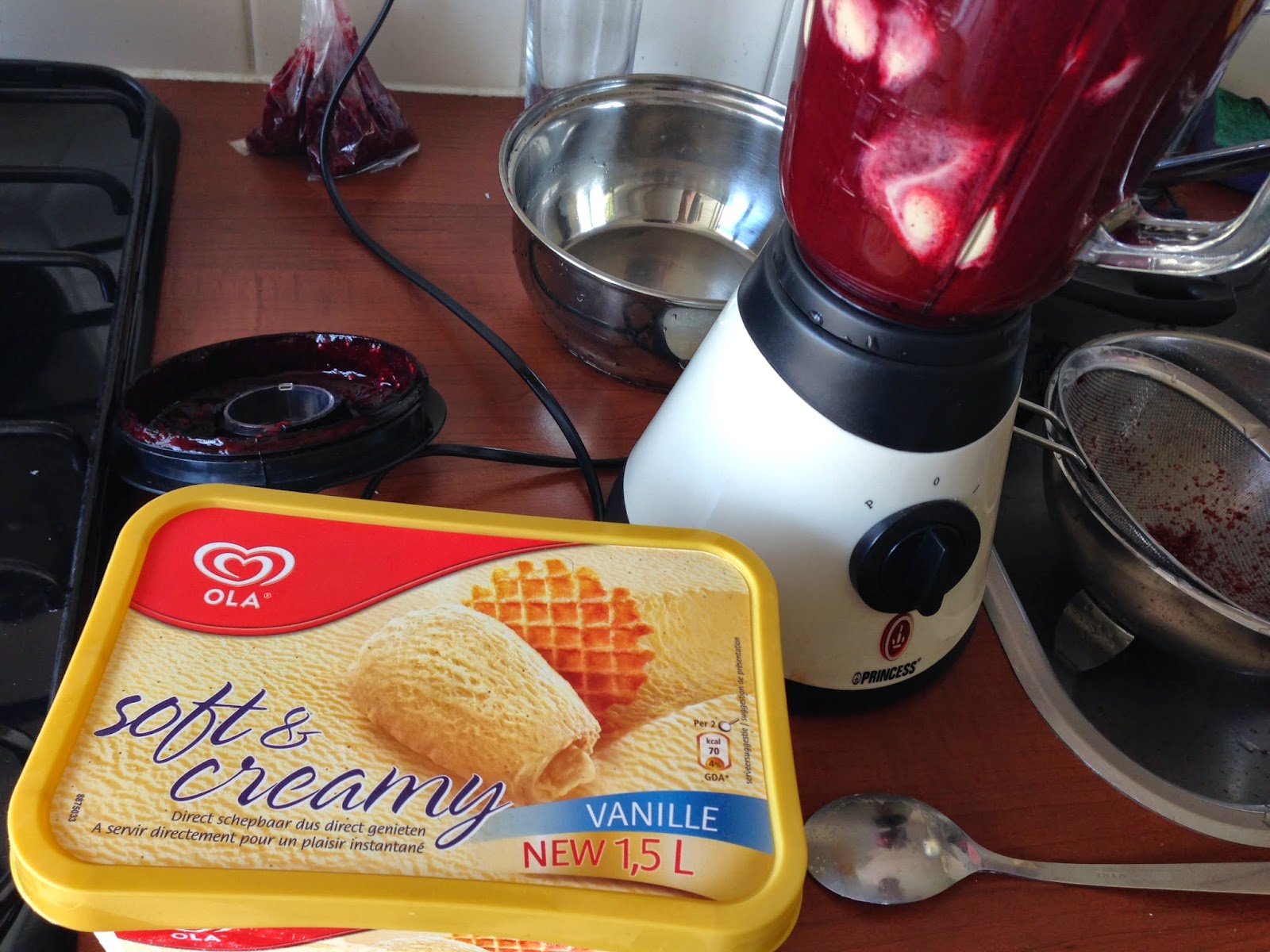 Hot weather makes sure that ice cream is more tasty than in winter. Strange no? At any rate (Again, ignore the Ola brand logo on the right, it has nothing to do with me not getting paid to write this, but everything with me being lazy about editing images.) you simply put the mixture back into the blender (I recommend rinsing it with water first to get rid of any leftover seeds) and then adding a good few scoops of vanilla ice cream. Or even strawberry ice cream if you feel like mixing up some flavours. 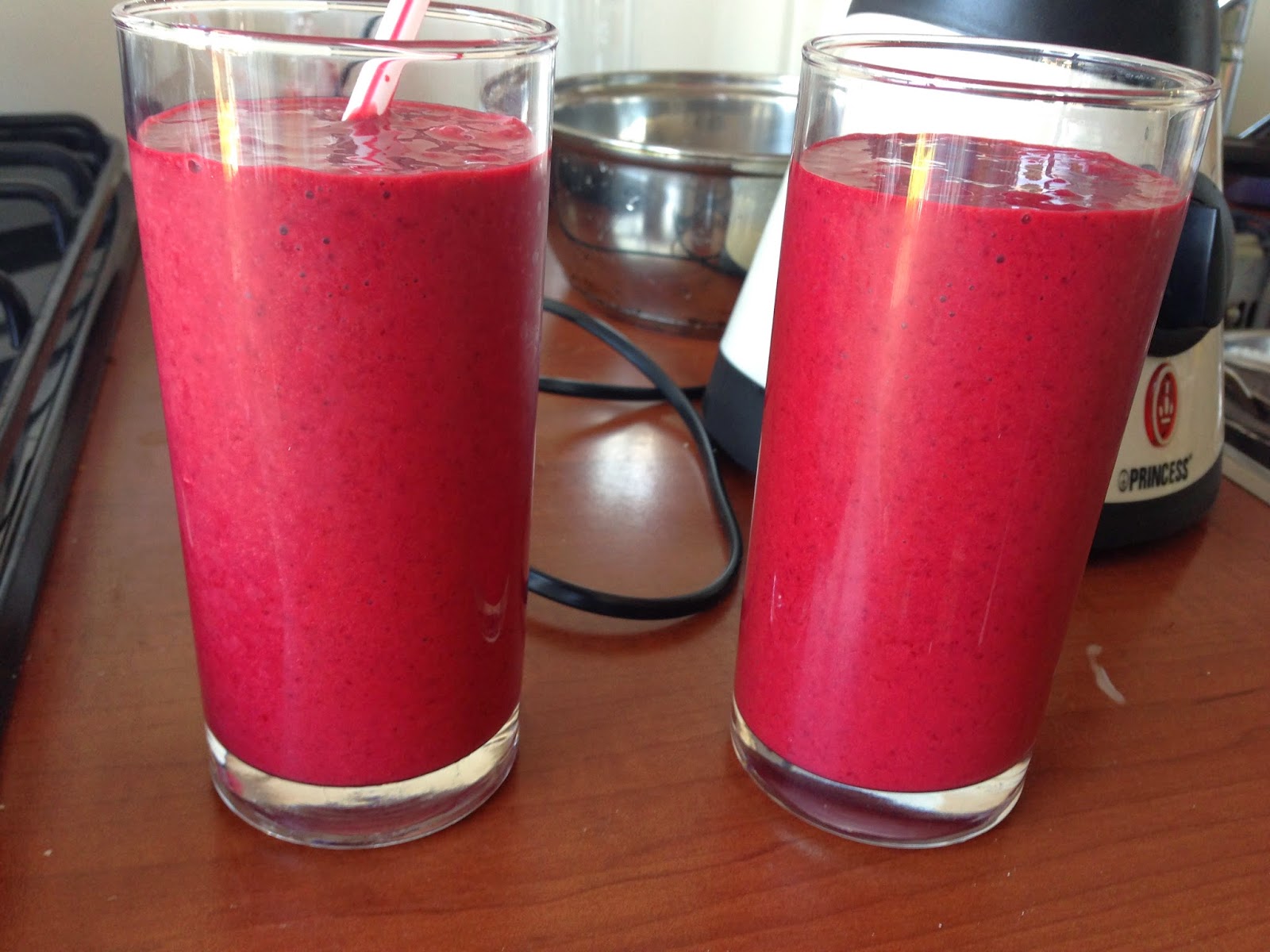 Alternatively a good bunch of plain water ice cubes from your own freezer and some milk will do the trick as well and is generally the healthier option. If you dislike sour, you shouldn't be eating these berries to begin with, but to soften the bite you can add sugar to improve the taste to your liking. Simply blend the ingredients some more and you'll have 3-4 nice and cold, refreshing blackberry smoothies! 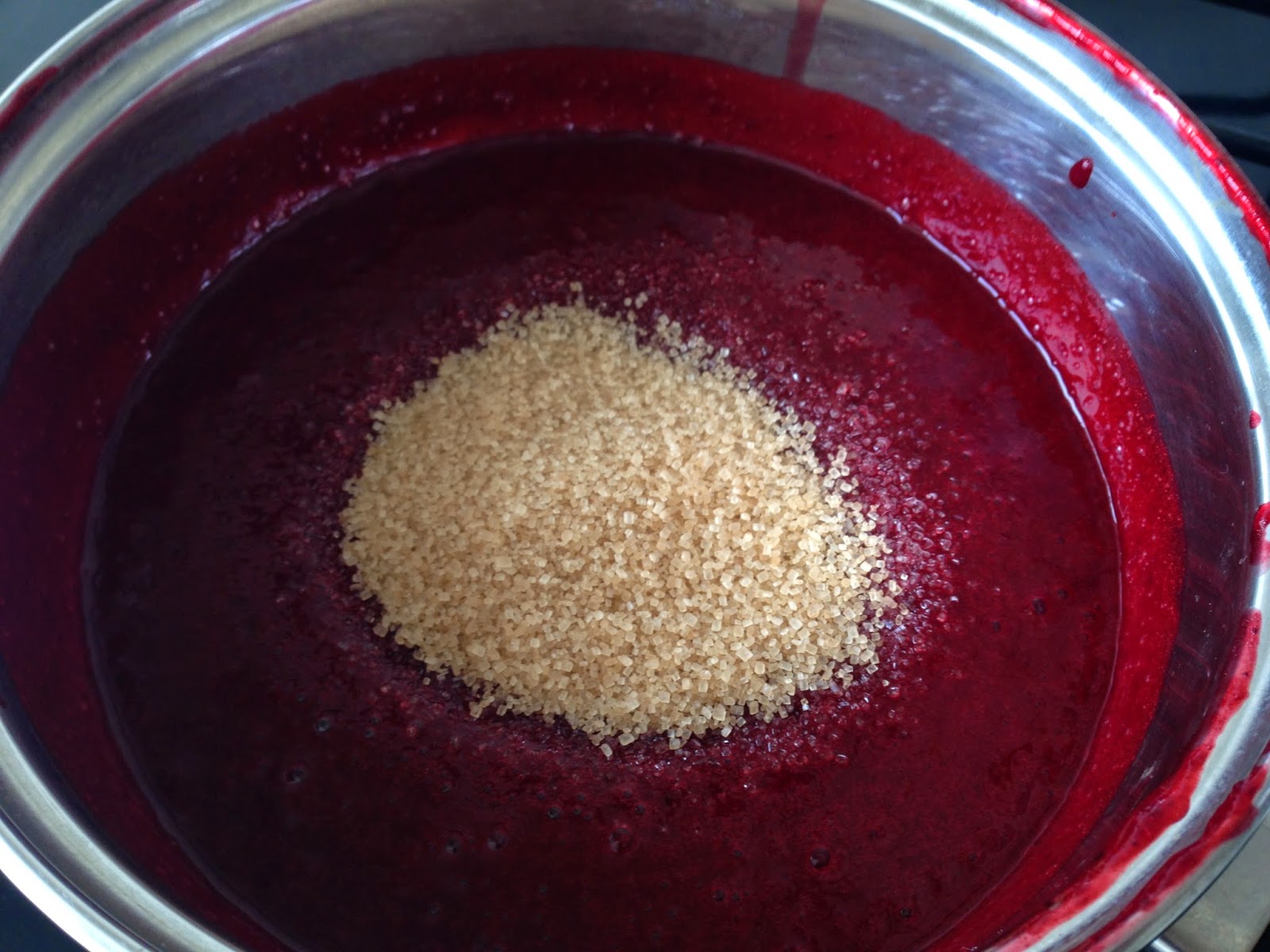 Ice cream can be eaten in many ways, but syrup can also be used in many ways. Put it on ice, put it on pancakes, mix it with a smoothy. The preparation steps are still similar, but as you may know, syrup has a much higher viscosity level than plain blended juice. The easiest way to achieve this will be to evaporate the water and adding sugar. A lot of sugar. In this case I'm using cane sugar, but powdered sugar or regular sugar will do the trick. Just add as much as you feel will dissolve, but not so much that your teeth will drop from your mouth on drinking a few spoons. 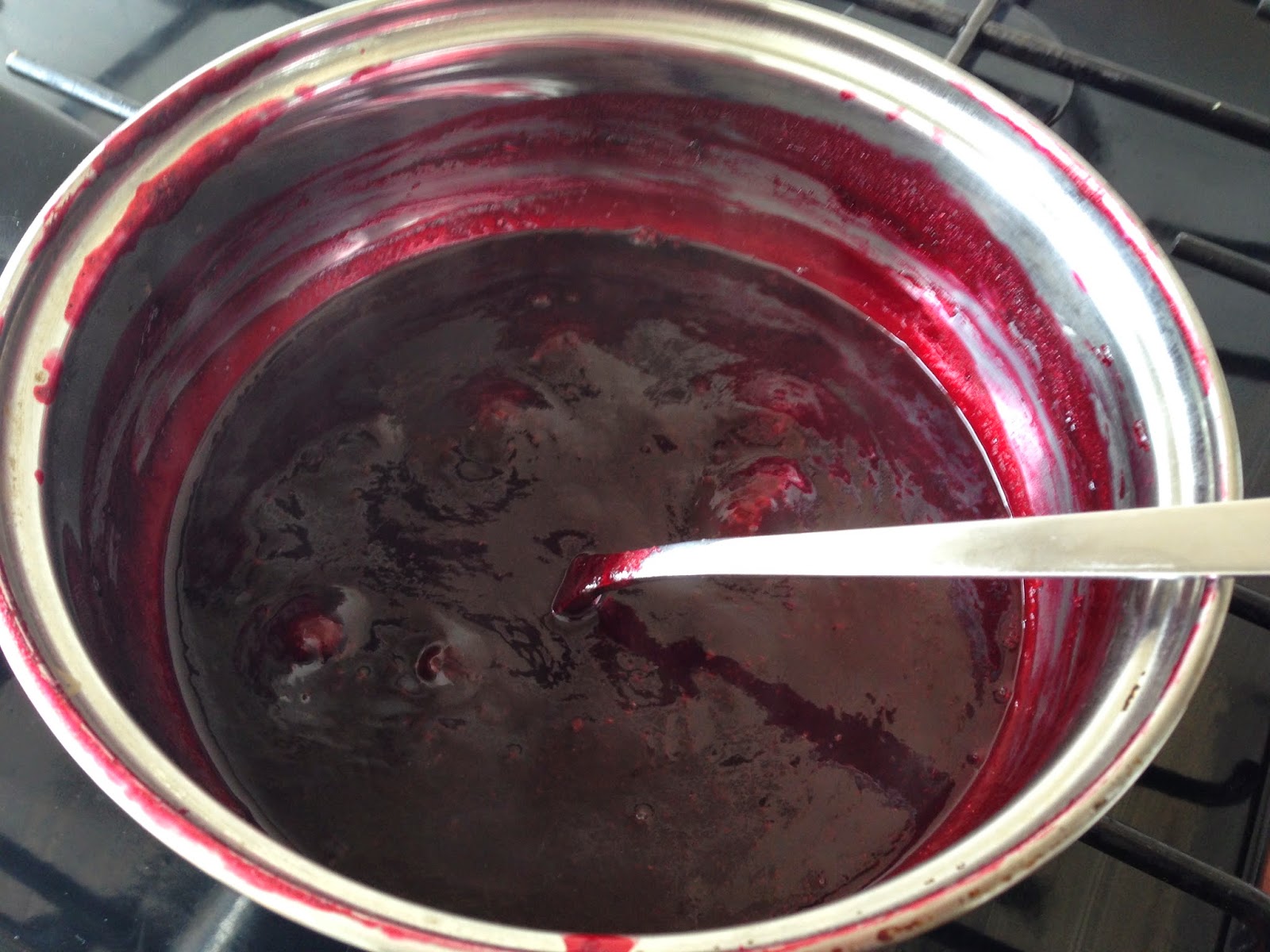 Heating up the mixture will ensure the sugar will dissolve more easily into the juice, with the added benefit of pasteurizing the mix. In other words, you'll kill most bacteria that might still have been in there, and ensure the resulting syrup should have a long life in your fridge to be used for many weeks to come. You'll need to do this on a low fire for at least half an hour, while stirring. I hope you got some music to listen to meanwhile.

A low simmering fire is key here. Much as you might be tempted to do so, you do NOT want a big bubbling mass of red dye all over your kitchen. Just go with "bubbles are bad", "steam is good" and keep stirring that spoon all the while to ensure the bottom doesn't turn to caramel. As long as you see steam coming up, that means water is evaporating and the juice is getting thicker. Be sure to scrape the sides into the mixture so and then before it cakes there permanently. 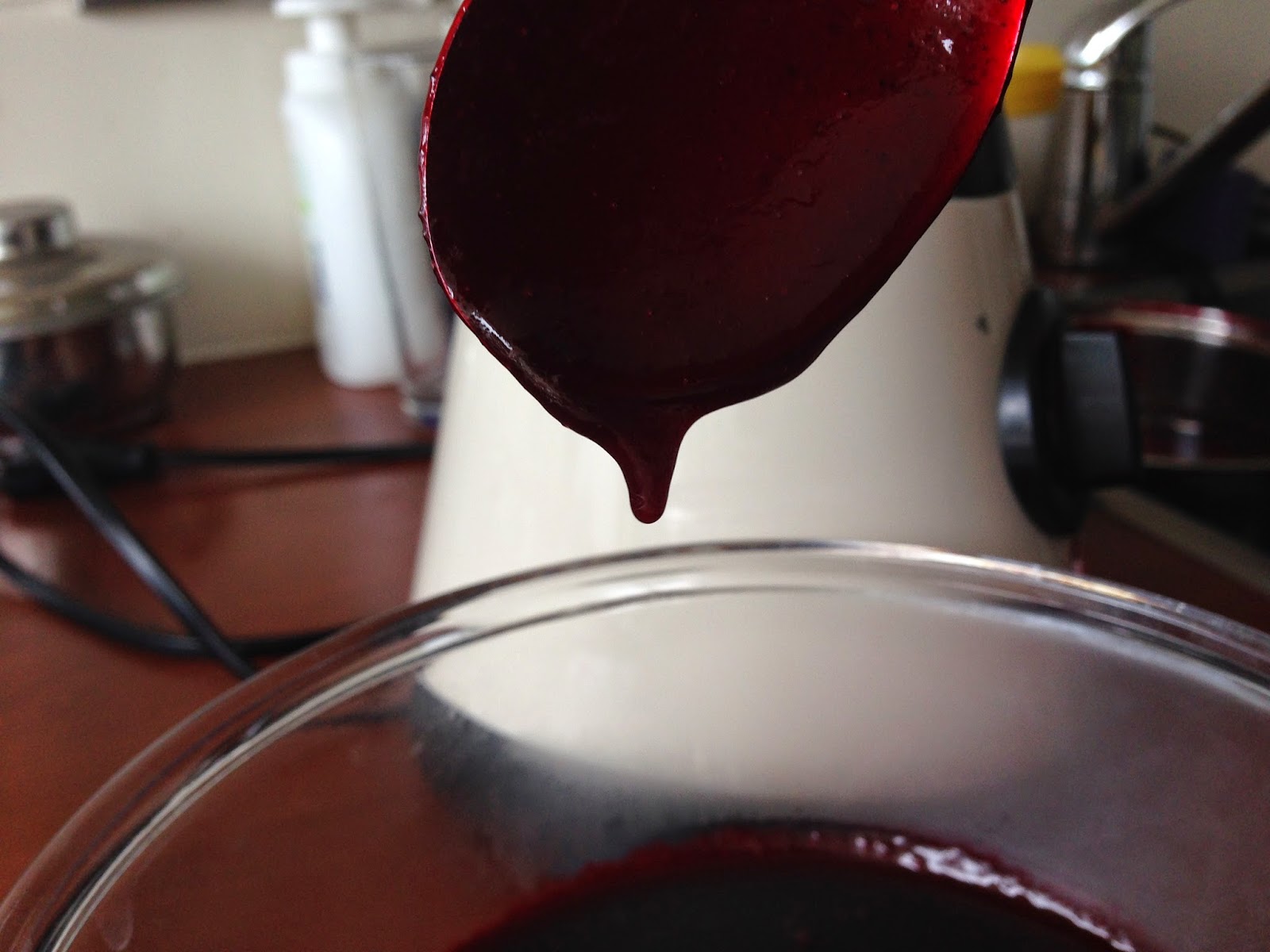 Near the end the amount of steam should be getting less and less, thats the time you want to turn off the fire and move the mixture into a glass bowl and leave it there. As it cools down the viscosity should improve a bit further. Once it's cooled down enough, put some foil over the top and put it into the fridge.

If you've left it there a while it's quite likely you'll end up with a skin on top. Or simply put "jelly". You can mix this into the cooled down syrup with a fork or re-heat it before using to melt the skin. At any rate, you're pretty much set to use the result as you see fit.

Note that while this example was made using blackberries, you can use try doing this with cherries, strawberries, redberries, raspberries, cranberries or even oranges if you so feel like it. The process is mostly the same. Blend, filter, add sugar and evaporate water.

On closing I'd like to leave you with this image of the end result. 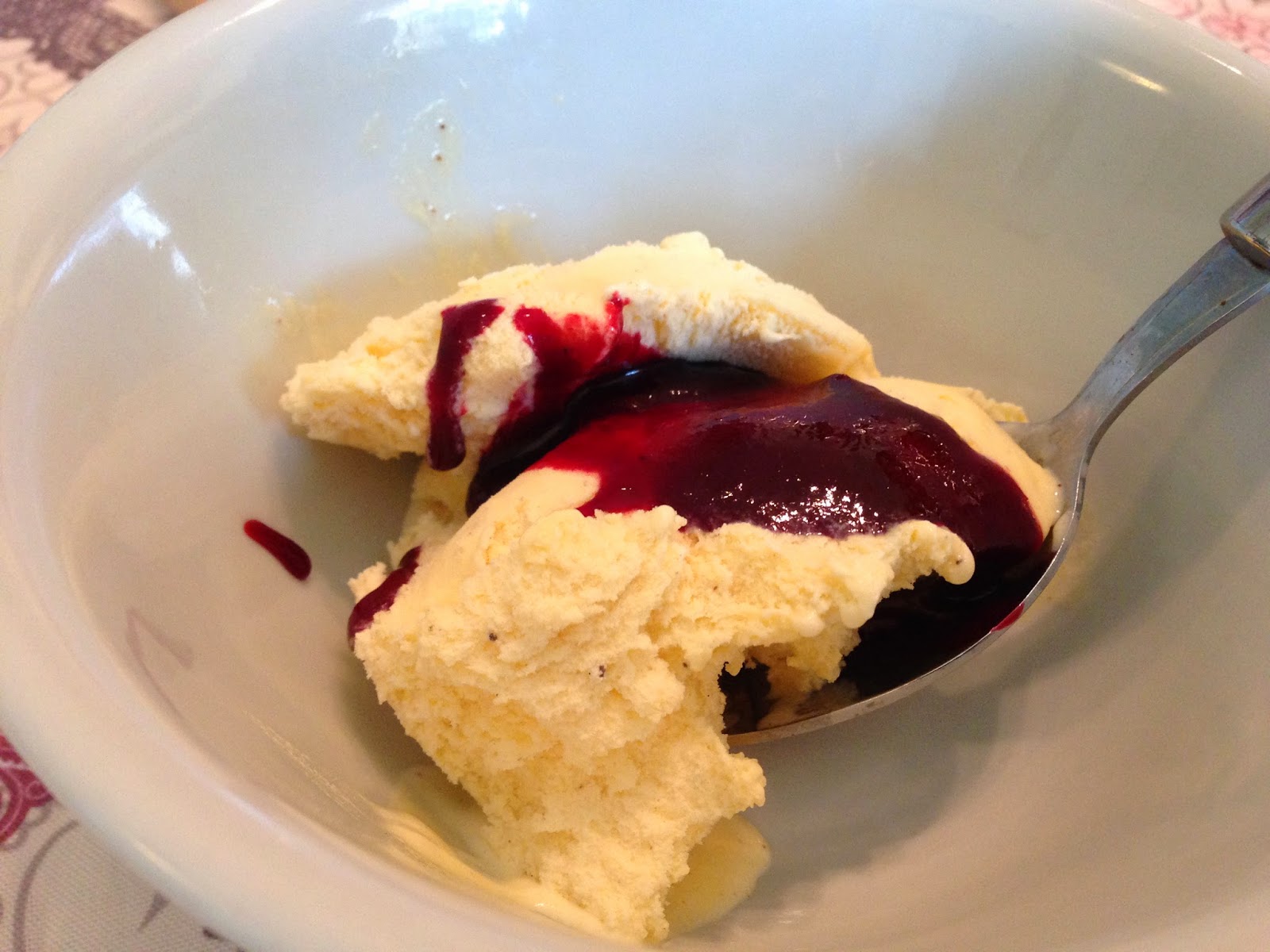