November 15, 2009
bbr
5
As said last week, I'm getting a few chars up to cooking speed. All four of them are now at 385. Had plenty (and then some) meat still in the bank. Only had to fish a stack or few of Whitescales to get to the 300 mark. Bloody things weren't being sold on the AH, so...

A couple more pictures today, had a look through my screenshot folder, which is always good fun. I asked a few weeks ago where a certain screen was taken, well here's proof of that location. 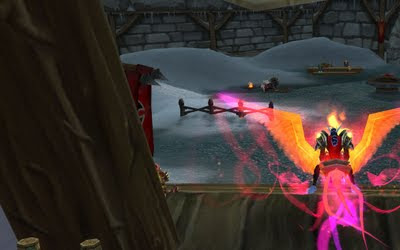 And he's totally got his cookie don't worry. Also, I ran into a minor issue when cleaning up some quests in EPL (was there for fish), and eventually got poked by a GM to post it on the official forums. 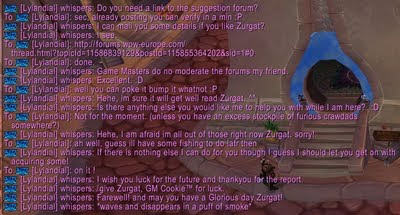 He totally gave a cookie! - Insert something here about a GM role playing rant - Later on, we were doing Trial of the Grand Crusader (25-ToC) and wiping on anub like most people are. 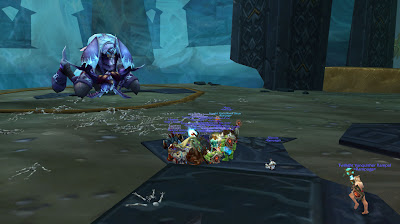 When suddenly, after a wipe I ran into this disturbing sight: 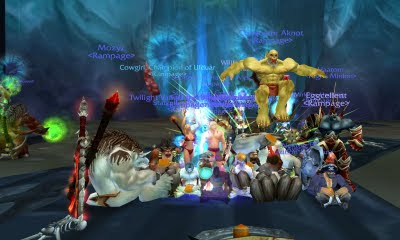 Yeah, it's the naked players in a raid bug. Quite odd.. Never seen it before, but heard others having it plenty of times. Someone should make a wow comic of that sometime... Let me know if someone does. As a closing sight, a tip. Do not, under any circumstances, distract your healers while they're healing.

Gorakk is still awesome, even if I killed him :(
I'm nekkid!

Fanfact about the naked bug.

If you put on a set of http://www.wowhead.com/?item=34008 (or the Alliance version if you're Blue) and take them off, everyone's gear will be put back on (Or you could just keep wearing them for epic Faction Champion attempts 8D).

Ah, that item. I got rid of that one.
I guess the cause is just a caching issue if it's that easily fixed.