A hundred Glyphs and more 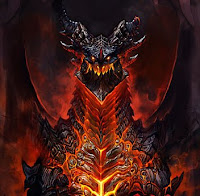 So, what should you expect to find in WoW if you've been out of the game for three months or more? Well, you probably have 7 days of free playtime waiting for you. (I did) So, I decided to use those and get ready in the next few days before Cataclysm officially starts and the race for the first level 85 begins again. Not that I'll bother going that fast, but hey, it's always fun to see a bunch of tools slave themselves half to death on trying to be first. Some will actually succeed too. Ah yes, Cataclysm. A time of great changes, some good, some bad. The first thing you'll notice upon "trying" to log in, is a series of patches. ~5 GB, another ~1.5GB, and one or two ~200MB. When you do finally get that done you'll encounter the new login screen. Deathwing himself. Don't worry though, you'll encounter him again soon enough... (Que ominous music here) Upon logging on, you'll notice the higher quality character selection screen as well as new backgrounds for some races. Quit messing around and get in there. Dalaran, which is where most people will have left their characters. Find the flight trainer and learn 310% flying skill if you didn't get it for free. Then visit your class trainer and learn the new skills. Most important of all will be "Mastery". Talents You'll also notice all your talents were reset. (Press "N") Heck, the game will probably have told you so upon logging on, but depending on your addons you might have a hard time seeing that message in between all the LUA errors. (Mapster and Routes were causing a lot here, about 20 per second) WoW works surprisingly well without addons nowadays, though bartender, fubar, shadowed_UF and Prat are still addons I'd not really be able to do without anymore. Luckily those seem to work fairly well after a quick update. Anyway, the new talent interface is awesome! No more cursing and respeccing due to a mis-click. The short trees are kind of sucky though... But I guess they had their reasons. Glyphs Next to the talents tab, you'll find what's left of your Glyphs. And, you'll also notice you now have nine slots instead of the previous six. All neatly divided into groups of three: Minor, Major, Primal Glyphs. There's also a scrolling list on the right showing you what glyphs you have learned and have not yet learned. So... That's where I'm at right now. 8x lvl 80 chars, all needing a few dozen glyphs to fill that nice and useful list. Need herbs, inks, etc. Then, I find out there are NEW glyphs that my mage hadn't learned yet. (even though he was all done a few months ago) So he has to start doing research again and read some books as well. The Rest Then, well, aside almost every city being changed. The landscape wildly different in areas, as well as completely new areas, more auction houses, and every single quest being reactivated. There's plenty to do for now. Just, be careful of Deathwing. He IS out there. And he WILL get you.
at December 04, 2010