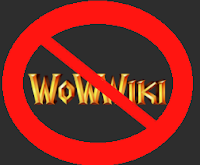 So, Cataclysm is now "live" near a month and everyone's had some time to explore all the "new" things. Plenty of new things to be annoyed at, plenty of bugs discovered and see them "not" getting fixed. And then there's Archaeology. A whole new kind of boredom in itself. Also, Wowwiki is DEAD. Don't use it anymore. More on that later. So, let's do some ranting. Archaeology If you're a fresh level 80 and want to try a new way of leveling then I'd encourage you to pick up Archaeology. It's the new secondary profession that every character on the server will get access to. Funny enough you get a LOT of XP from it, and within no time at all you'll find you've gained your very first level without even touching a single mob or quest. Personally I went from 82 to 85 using it, and found I could've easily started earlier. Now, a few tips if you want to get the most out of this. * First of all, buy the fasted riding skill that you can. Seriously you will need it. * Be a mage, or find a guild you can join that is at least level 8 so you have the -15 minutes of cooldown on your hearthstone. * Pick up engineering, and/or any other form of travel toys like the Dalaran teleport ring, the argent crusade tabard, the black temple necklace and the BRD mole machine. It all adds up, trust me. With that sorted, you'll want to just fly around and "do" the skill with as little flight time as possible all the way up to 100 skill points. Until you get there "do not" complete any projects. Once you've reached 100 skill points, put in whatever scrolls and tablets you've got and blow away to 120 or whatever. Stick to a single continent - Kalimdor for horde, or Eastern kingdoms if you're alliance. Make "sure" you check the town board and get the new portals unlocked so you'll have easier travel access. Especially for Kalimdor this is a blessing. Once you reach 300 skill you're able to go to outland. Don't bother, unless you're also after some of the achievements. Yes it's boring and you're looking for a new place to fly around in but just bear with it for now. At 375 skill you could go to outland. Again don't bother. At 425 things get interesting, now you'll have access to "potentially" getting some of the worthwhile rares and Tol'vir artifacts. There's only a 13% chance or so for a new dig site to spawn. At a great annoyance you'll mostly be completing common artifacts for them though, so you'll be spending a long time cursing them for not spawning more, and cursing the Night elves for having so damn many dig sites. At any rate, use whatever boosts you got, you'll be Illustrious Grand Master in no time. Though it won't seem that way. And yes it's a dreadfully boring and frustrating skill to raise. Player versus P...ractically nobody? Once you've reached level 85 you'll have access to Tol Barad. A new PvP zone in the same theme as Wintergrasp. One faction controls the island and some extra daily quests, the other does not. And this gets fought over every two or so hours. Most of the time this meant horde was defending and in control of the daily quests and raid instance with a single boss, and laughing at the alliance for failing to attack. That is, until blizzard in it's infinite (retarded) wisdom decided to give 1800 honor points to the "attacking side" if they won. Now, the defending side simply does nothing at all. Barely 10 people sign up if that at all, and the attacking side gets a free 1800 honor. That is, if you even get onto the island because half the bloody server is signing up for that 1800 honor, and the "battle" as it was before is now non existent. It's simply turned into a tag 'n turn pve content of which the only purpose now seems to be free honor. Way to go blizzard. Another successful "fix" that screwed over anyone trying to have some fun at PvP. Wowwiki is DEAD Indeed, it's dead. Don't bother going there anymore you won't find anything but advertisements, spam, goldsellers and the shell of a poorly updated site. However, WowPedia is now in place as it's successor. Looks familiar you say? Well, there's a perfectly logical explanation for that. In short, Wikia - the host, and now owner of wowwiki felt the site needed more advertisements to get a better revenue for the site. The site's admins and general userbase disagreed, then wikia claimed the site for itself and put up the advertisements anyway. The contributors and most of the staff of the original wowwiki moved to create a new site WowPedia, where all new updates etc are now being done. In short, WowWiki is dead. You can stop using it now. Squirrels! Yet more squirrels and other critters to /love. You'll need to be level 85 to be able to complete this one. Sorted by zone: * Alpine Chipmunk: Mount Hyjal * Grotto Vole: Mount Hyjal * Rock Viper: Mount Hyjal & Silithus * Rockchewer Whelk: Shimmering Expanse in Vash'ir * Sea Cucumber: Vash'ir * Highlands Turkey: Twilight Highlands * Yellow-Bellied Marmot: Twilight Highlands * Rattlesnake: Twilight Highlands * Oasis Moth: Uldum & Lost City of Tol'vir * Mac Frog: Uldum - In ramkahen as you teleport in. * Baradin Fox Kit: Tol Barad - contested island * Sassy Cat: Tol Barad - Rustberg village * Wharf Rat: Tol Barad - Rustberg village Some critters also exist in other places, but these are the easiest to get.
at December 31, 2010