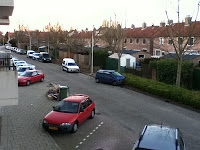 Sometimes when you least expect it.

Like for example, at 0.38 in the middle of the night... When I was "trying",.. oh so very much to get some sleep. The picture on the side here, is the resulting image I took the next morning.

Apparently, either a joyrider, or some drunk idiot in a red car was racing around the block (Yes, I could hear him doing exactly that for the past half an hour). After having done so for a while I suddenly heard a *BLAAAAAAM!* and then silence. So, I checked outside (sadly my bedroom is like 10 meters away from where the fool hit the blue car. (as you can see on the image) So my adrenalin got a nice big spike right there, and sleep was pretty much out of the question for the next 15-30 minutes. Especially,,,,.... since after a crash like that a whole bunch of other people woke up and came outside to have a look at the wreck that the red car left behind.

As you can see, or not see from the image, the red car indeed did a hit and run.
Basically what happened was, he hit the blue car, the blue car hit the white car, and then he backed up and drove away. No idea who, but I haven't heard much more of this a day or two later. Other than the blue car having gotten towed away, and the white one still being there.
at March 25, 2011