A journey of 7 years 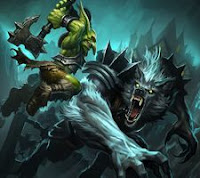 I've played World of Warcraft for, seven, nearly eight years. I got into the game at the recommendation of a close friend. One who I now longer speak to. Not for bad reasons, we just, don't anymore. It was open beta, you could try it for free and discover new things, explore new lands never seen before. I started out as a lowly warlock in a dark land discovering magics untold and summoning demons at my will and command. Undercity my home at the time. Not long after did I create a paladin, who did slay those very same demons. I was inexperienced and yet made progress through strange lands with always a friend at my side. A shield and a sword were my tools of the trade, using a talent tree spec one would now laugh at to even consider. Elwyn forest, Westfall, Redridge mountains, Duskwood and so many more. Progress was slow, but everything was new and every level our characters gained made us more powerful. She did not care much for the strength of her armor, greens she would use while I looked for blue. The paladin looked like a clown, armor a mix all red and green, blue and gray, gold and black. It mattered not, for in duels I beat plenty of others. A quick heal a stab or two there, clashing my shield. If she did sleep, my adventures would always take me back to the darker forests and places of the Undercity. People looked strange compared to the humans and elves, but still I belonged here more than among those pretenders. The warlock was abandoned for now, but not forgotten. I started a Troll, a rogue so they say and stealth was his game. The lands were different yet again and it was at the use of a dagger and blade that he did show me a new way. STAB in the back and dead was my foe, so different from a sword and shield and... so much MORE fun. Eventually we did part ways, my friend then going elsewhere and not heard of for many a year. Stranded as I was on an American server with high latencies I decided to make the best of things and create a life anew with my knowledge thus far. A new rogue is what I thus made. Zurgat I named him, for no reason other than my own. He grew to be level 43, then more. New friends were found and old friends rediscovered. Night Lions at first, a guild of few people. Fellowship of the Horn came later, and was his home for near two years. In here I discovered a new game, Raiding. Only occasional at first, then more and more. My voice was heard on teamspeak and ventrillo, fewer would disagree with me as time did pass. Promoted to new ranks within the guild, and eventually made to lead a mass of 40 players, picking heads among others still waiting to enter. Molten Core, Onyxia's Lair and Blackwing Lair did we complete and conquer. Vaelastrahz was especially fun, and frustrating. 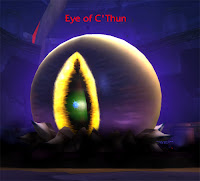 The game would change though, the Burning Crusade was announced and would soon arrive. We did manage to start on the Temple of Anh'Qiraj, but would not complete even the first boss before that time. Still, we did try and try and try. 80%, 70%, 50%. I do not recall it exactly, perhaps we got to 23% in the end, but then the Burning Crusade came. A new land awaited, and we had made great plans for our future. Some friends would be angered, but we would lay new roads into a brighter future with more progress. Rampage was created, a new guild rising from the ashes of one mostly neglected and full of casual players. FEL REAVER! *Splat* I only died perhaps three times to them, but it's always fun to look back at them. I hope Blizzard will add such monstrosities back to the game in the future. Eventually the guild players would reach 70, and the raiding began again. 10 man this time, and later 25. Constantly members would be gained and lost, an ongoing struggle for every guild in the game, especially since 40 man raids were the default before then. Karazhan, Serpentshrine, Tempest Keep, The Black Temple, and even Mount Hyjal did we conquer and complete. Quite proud of ourselves we were too. The Sunwell was something different, but even so we did barely get past the Twins before the nerfs started and patch 3.0 was installed. Wrath of the Lich King would start a new expansion. Sooner than expected sadly. Naxxramas we cleared, and every other instance. Some on heroic mode, some not. 3.x was a less amusing time, though the new lands were fun to explore at first. Many disagreements did arise from whether we should clear a boss on heroic mode or not, so that we might have to skip another boss later, or get one more item from another to better our abilities. The Burning Crusade was more to my liking, it was harder and no choices needed to be taken on how to defeat a boss. You either did it, or did not. But when you did "it felt good", you had achieved something together that took weeks or more of trying. 4.x was coming, and things fell apart, Rampage a mere shadow of it's former self. Some players gone to be with their family, away from the game, others to different servers and yet others to start a new guild for themselves. Such is the way of many guilds in WoW and we were not immune to this change either it seemed. Cataclysm held some challenges still, the guild, and two private storage guilds would all reach level 25. But, little more glory was to be had. We recruited several guilds under our wing, and we did manage to clear a number of 10 man raids but as far as satisfaction went in those kills... the spark of it has been somewhat lost. Perhaps 10 man raids are simply not as glorious as the old 40 player raids were, or the player-base in general had changed too much from what it was before. Regardless, before the release of patch 4.3, Rampage was no more. Oh it still exists on a few alts, but no longer active. Perhaps it'll open an eye from it's slumber when 5.x comes around but I have no high hopes for it. Life is a journey, regardless of your eventual destination, what matters most is the sights you see along it's path. And indeed, we did see many things and made many new friends along the way.
at December 28, 2011

Wow nice writting skills :). I am glad i found this while serving boringly.

As for what u said. I had pretty much same storie. Got to twins in AQ40 then the last 2 mounths before tbc no one wanted to raid anymore.
It was such a shame raiding is everything in wow.
Sticking with my guild I went casual in tbc trying to get the guild to get enough for 25 man, but we sadly never did more then Gruul.
Wrath came and gone and i just played because i had no better game to play.
Now in cata i'm terribly bored raiding aint what it used to be. Such a shame, such a shame.
I quite the game and have no regret no remorse.
just a nostalgic feeling now and then about Dreamgaurd and Ysera's Dream. My guilds, my live, my only true fun in wow.
-Springcaller EU.

Glad you enjoyed it :)

And some coding so n then.
There's plenty to do until Diablo 3 hits the shelves :P

y plenty of stuff.
Theres skyrim and homm6 (so annpying i need to buy a new videocard to play it xD).
Even played a bit of starwars online on my brothers accoutn. its not even that bad xD.

Now i am just waiting for my new card to arrive so i can start playing in earnest again :). Just bin working more then is good for me now.

And trolling some forums is never a bad thing either :>

money brings time? Is that because ppl say time is money?
cause lest time i checked i couldnt buy time. just pay it. Like i'm paying 5 minutes reading that and writing this ^^.

And trolling forums is indeed a good place to spend (pun inteded) time.

Greetings from Diabolique...if you remember me

Been a while aye. :P