Today we are gonna learn a little bit about Yooka-Laylee and Yooka-Laylee and the Impossible Lair. Developed by Playtonic Games and published by Team17 Digital Ltd in 2017 and 2019 respectfully, these games follow the adventures of Yooka and Laylee, a chameleon and a bat, as they try to defeat Capital B and stop his evil plans. 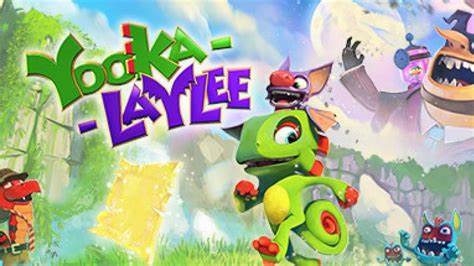 Have you ever played Spyro games as a child? Are you having trouble finding games similar to that good old collect-a-thon style? Well, look no further! Yooka-Laylee is the modern equivalent of the old classics.

As Yooka and Laylee were enjoying themselves Capital B puts his plan to steal all the books of the world into motion. Out heroes try to stop their special book from being stolen, but they only succeeded in scattering the golden pagies. And so their quest begins. Their goal is to find all the pagies and find out who is behind all this. 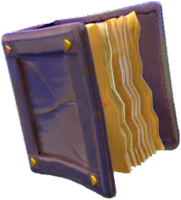 You begin your adventure in the Hivory Towers, the main hub world of the game. Here you will find the Grand Tomes, which will teleport you into their own worlds. Unlocking the grand tome requires a certain number of pagies. Another ability you have is to expand the grand tomes. This also requires pagies but will, as its name says, expand the world within the grand tome, revealing more puzzles, collectibles, characters, and (usually) the boss. 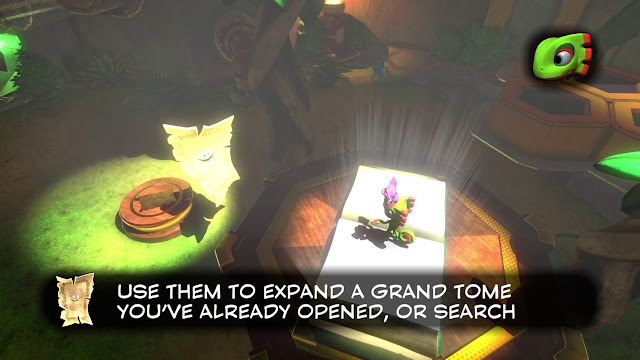 In their adventures, Yooka and Laylee will encounter a variety of creatures, some helpful, others not so much. Trowzer will sell you moves and abilities, Vendi will allow you to equip different tonics, Dr. Puzz transforms you, Rextro unlocks the arcade games, while Kartos presents the Kartos Challenge (More on this under mini-games).
Vendi's tonics will give you small benefits like extra hp or energy. Or alternate the quality of the graphics, or maybe produce sounds when you are near a secret. Nothing game-breaking but helpful if needed.
Other, less relevant characters will either change the world (Nimbo), or have repeated (Clara Lost, Planker) or one-off quests (Duke). 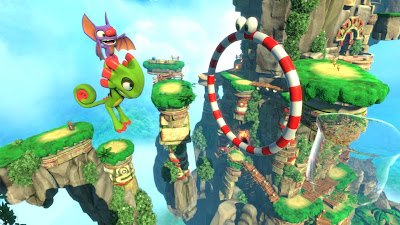 Unlocking a new area in the Hivory towers or spending quills at Trowser's will give you abilities. Abilities usually spend energy to use. Most of these are needed to complete quests, find the collectibles and secrets. Some of the most notable ones include flying, aoe blast, underwater walking and going invisible.

So, what is it that you will be collecting? Good question. Apart from the golden pagies, which are the main focus of the game, you will also be collecting Quills, Ghost Writers, Mollycooles, Play Coins, Health and Energy extenders, as well as the very hidden Pirate treasures.  Each Grand Tome has 25 golden pagies, 200 quills for you to find, 5 different ghost writers, 1 each of mollycool, play coin, hp extender, energy extender, and a pirate treasure. Quills are used to purchase new abilities. Collecting all of them rewards you with a golden pagie. 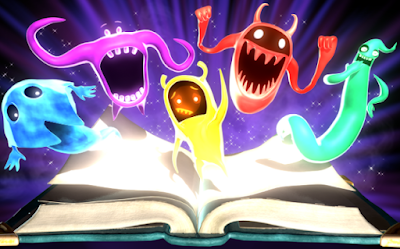 Every ghost writer is different and has a unique twist. Normy, the yellow one is usually hidden somewhere in the open. Ann-Gree, the red one is battle-hungry and will attack you if you approach him. Defeat him in order to collect him. Evie, the green one is very elusive and will require some quick reactions to be caught. Heidi, the blue one, was the most difficult for me. It requires you to actually listen to its laughter (it is invisible most of the time, flashes on the screen sometimes), then use Laylee's Sonar to reveal it. Last, but not least, Fee-Dee, the purple one will require you to feed it berries before being collected. Once again, collecting all of them will reward you with a golden pagie.

Looking for a change of pace? Find a mollycool in a grand tome and talk to Dr. Puzz. She will activate her machine and transform you into something, let's just say, world appropriate. These transformations come with their own quests and abilities, so feel free to explore as much as possible.
Find a play token and speak to Rextro to unlock arcade mini-games. These include top-down kart racer, flappy bird, and many more... Beating them once rewards a pagie, but setting a high score will reward a second one. Other than flappy bird, they are not difficult and you should succeed first try. 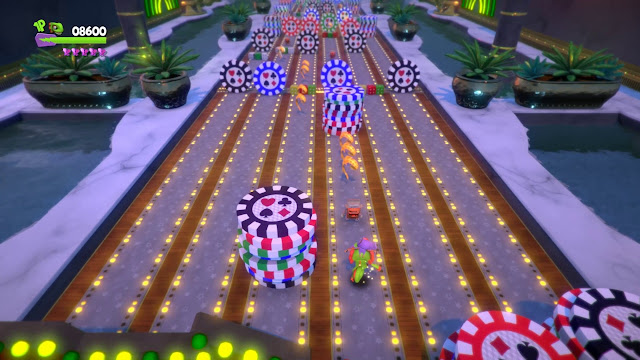 All bosses in this game are somewhat part of the world. The great Rampo is a damn in the Tribalstack Tropics, I.N.E.P.T is the security guard in the Capital Cashino, Planette is a literal planet in the Galleon Galaxy... Each fight has a unique twist, which I will let you find out on your own. 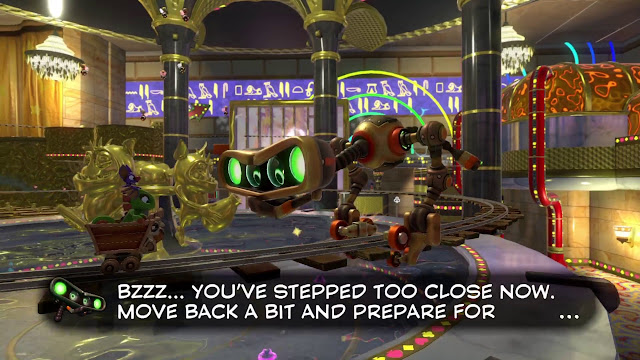 Special thank you to Dr. Quack for those annoying quizzes. Not exactly a boss, but more of an encounter, he will ask you several multiple choices questions about the grand tomes, characters, or even your own stats. 3 lives, 10 points. Good luck.

Yooka-Laylee and the impossible lair 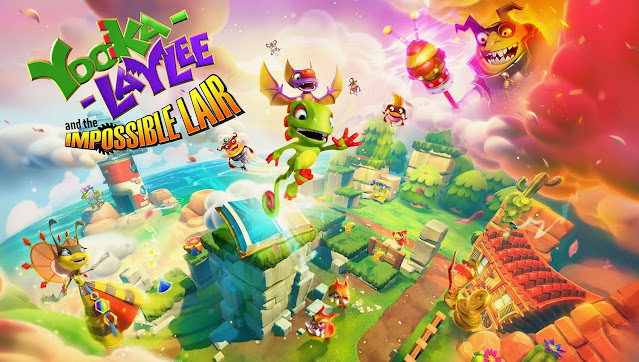 A Sequel or a new take?

Unlike Yooka-Laylee, Yooka-Laylee and the impossible lair is a 2D platformer. And while many characters and items return, the differences are significant. Trowser doesn't sell abilities but unlocks paywalls to gain access to new levels. Quills are back as the main currency, ghost writers are back, but this time as special colored quills. Pagies have special minigames and will allow you to alter the overworld.
The story continues, as Capital B is back and trying to take over the kingdom. It's up to our trusty heroes to prevent the new disaster. Their goal this time is to assemble the queen's bee-talion and stop Capital B as soon as possible. 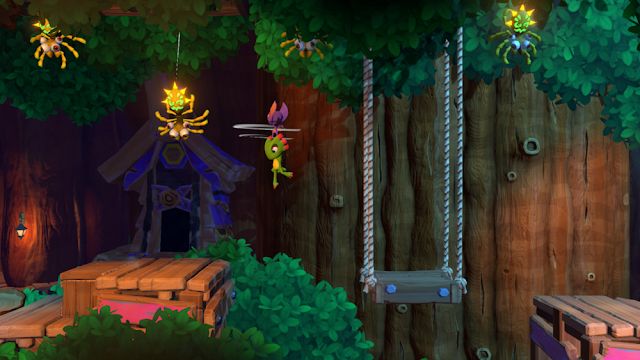 In this game, you start in the tutorial but are thrown into the impossible lair immediately after. It is possible to succeed in beating it right there, but it requires incredible skill. Some speedrunners have done it in less than 15 minutes.
After expected death, you will be saved by the Queen bee and instructed to assemble the bee-talion as every bee you gather means taking 1 extra hit in the impossible lair. This is where it becomes interesting, the impossible lair remains open for you to try it at any given moment! It's up to you to decide how many bees are enough.
You unlock bees by completing levels scattered throughout the overworld. There is a total of 20 levels, but here is the twist: Each level has an alternative variant. So there are actually 40 levels to play! In order to unlock all levels, you will need to lower Trowser's paywalls, find and complete pagies challenges and solve various quests. Some variants are easily accessible, others will require you to think hard and find their triggers. 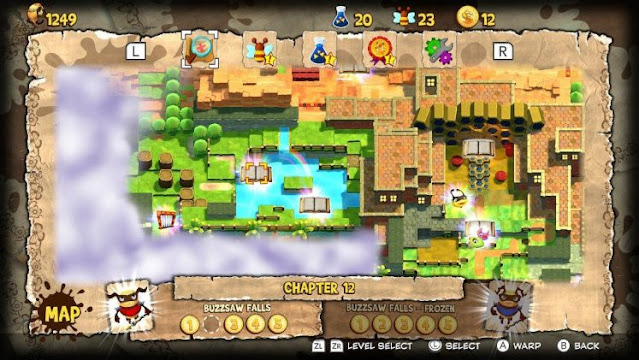 In addition, there are some bees hidden in the overworld, good luck finding and unlocking them. When you collect them all, you will have a total of 48 bees. Will this be enough to thwart Capital B? Find out for yourself as you try this game.