October 06, 2008
bbr
2
Home at last. Three days of Barcelona with sun, warm weather (22-24 degrees C), luxury food, lack of sleep and lovely interesting sights along the way. Only to come back home, step out of the airport and be greeted by darkness, cold weather (11-12 degrees C) and of all things RAIN. How's that for a home coming eh? 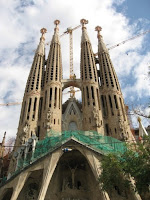 Good news Blizzard is cashing in, from a lawsuit filed against the creators of a well known bot program. World of Warcraft creator Blizzard looks set to get $6m (£3.36m) from the makers of a software 'bot'. - read it all. Beta stuff Not a huge lot that wasn't already posted earlier. Blade twisting daze duration increased to 8 seconds (up from 4). That's about it for rogues... Sad I know. Lightning reflexes and relentless strikes are still not on an acceptable level yet. Also, Enveloping Shadows now reduces the damage taken by area of effect attacks by 10/20/30%. (Up from 5/10/15%) Does anyone actually use that talent though? For other classes, such as druids and warriors taunt got an increased range (now 20 instead of 5) which is rather interesting, for ranged dps players. You just know in your bones that Blizzard will find a way to change this into a new boss tactic though. Fear it.
at October 06, 2008

And about the taunt, it's a welcome addition