Last post for this weekend, more next week no doubt. Still, today's another venerable "wall of text" for your enjoyment! If you're wondering why I'm not really bothering with posting much raid and dungeon info here, that's because there's just not that much to say about it. Sure, cataclysm starts with 4 raids and six 5-man dungeons and two more revamped old dungeons, but other than that... See for yourself. I've always enjoyed BRD (Blackrock Depths) though, it's BIG and good for soloing. In Cataclysm we'll be seeing Blackrock Caverns make an appearance, in mostly the same style and inspiration. It's got great potential. Icecrown Citadel - Patch 3.3, will have 12 bosses, 4 floors, and make use of those two airships you can see flying around in the zone. LFM BRC As far as "how" you'll find people to go to those dungeons with you, Blizzard is planning to implement Cross Server LFG. This should greatly increase the ease at which you find people to play with. At a turn-side however, this will make it a lot easier for ninjas and simply horrible players to get away with doing what they do best. Being idiots. Not only that, but, Blizzard intends to give some sort of reward for group leaders who successfully take a 5 man group through a cross server dungeon. The end result? Everyone will want to be leader, and nobody will want to make a regular group anymore... Time will tell how that fares. In due time the XS-LFG will most likely be expanded to be usable for raids as well. Further expanding the ninja problem. Hopefully some sort of reputation / Karma system will be implemented someday so you will have an easier time filtering out the rotten apples from PUGs. Account-wide (rather than character specific) achievements would go a LONG way in helping with that imo. That aside, I sincerely hope there'll be some gear checking and balancing when the system picks people to make a group with. I don't know about you, but when I'm trying to do the day's daily dungeon quest I surely can't be arsed with getting forcibly teamed up with somebody's green geared alt. Oh, and they're planning to make XS-LFG available starting 3.3 :) Professional Craftsmanship

How's that for a clever subtitle eh? Archeology will "primarily" be used to provide you with a new sort of glyph. Namely, "Ancient glyphs". These glyphs can't be made by scribes like the Major / Minor glyphs can. Archeology doesn't actually "make" glyphs either, but you use your ancient findings to trade in for the new items. For further character profession you can choose between some "Paths", you can change paths like any respec, and dual spec remembers the path per spec as well. Earning ranks down your selected Path of the ancients takes time and is limited to a certain maximum each week. Each path will have 2-3 ancient glyph choices, you can respec if you decide to go down another path. Initially there will be six paths available, but more are said to be added later in content patches. (4.1, 4.2 etc) * Path of Aman’Thul, the High Father * Path of Eonar, the Lifebinder * Path of Norgannon, the Dreamweaver * Path of Khaz’Goroth, the Shaper * Path of Aggramar, the Avenger * Path of Golganneth, the Thunderer Logically the paths will most likely focus on a certain aspect of gameplay. For instance: Tanking, physical dps, caster dps, healer, pvp dps, pvp healer. And provide some interesting utility here and there. Golganneth's path for example gives the bonuses: * Earth's Embrace: Physical damage taken decreased by 4% * Battle Hardened: Reduces the duration of stun and bleed effects by 20% * Medic: Bandages heal targets by an additional 30% * Fortification: (instant, 5 min cd) : Nearby allies take 10% less damage for 6 sec. * Breakthrough: (instant, 5 min cd) : Increases damage dealt by 10% for 10 sec. Only usable after dealing a critical strike. See MMOC for a few screens of the new Glyphs and the new Glyph intereface. It also looks like we'll bet getting one extra Major glyph at level 85, though that's not confirmed yet. 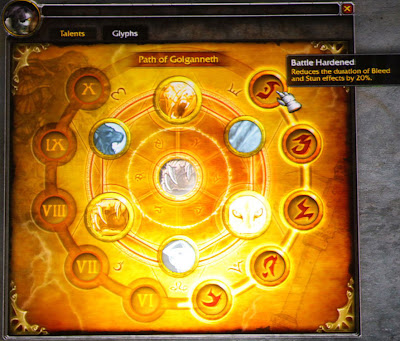 More talents Blizzard believes there are too many talents currently, they won't be adding another tier to all classes. Instead you'll just get the expected 5 talent points. However, the talents are also getting a full scale overhaul. The interface will be improved as well, you'll be able to see all three trees in one view instead of separate tabs. Most of the passive talents, such as "+1% crit" are being removed. Instead these bonuses will be given passively(Heh, funny). And you'll get more active talents. 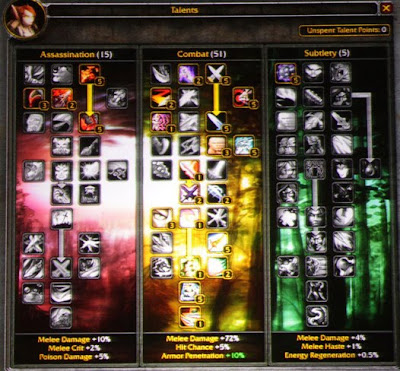 You can see the passive bonuses at the bottom of each tree. These will increase automatically as you put more talents in each tree. Each class has their own variation of those. Paladins and warriors for example, will receive health and blocking in their tanking tree. Melee damage and crit in their "damage" tree. T-t-t-teamwork!

Blizzard is doing a LOT of cool things for guilds in Cataclysm. One such features is a guild feed, probably RSS, in which people can see what bosses they've killed. This should leave little doubt about who's "first" or not. As stated earlier, your guild will also get it's very own achievement tab in which guild wide achievements will be stored. These achievements, players gaining XP, winning battlegrounds, Arenas, reputation and more. The maximum guild level will initially be lvl 20, each level will earn the guild a single talent point which can be used in the guild talent tree. Some such, talents will slightly increase the gold drops for all monsters killed in raids, dungeons and outside for all guild member. Some will reduce the cost of repairs, improve the effect potions have on members, reputation gains (awesome for grinding), xp gains from monsters (great for your alts), and what looks like mounted speed up to 10% (finally) re-added, mass resurrection (out of combat). Once the guild reaches level 20, any excess experience gained becomes a currency. This can then be used to buy patterns and hierlooms which become available for distribution. Be aware however, that those items are guild-bound. Should you ever decide to leave the guild you obtained the items from (or get kicked for being an idiot) the items will automatically be returned to the guild bank so they can be given to another player. Information wise, there's also a HUGE and much demanded (by myself included) feature being implemented. Profession listings. At last! You'll be able to check the professions and recipes of ALL members in the guild. No longer needing to ask whether there's an enchanter, blacksmith or whatever "online", simply look up the information you seek, check the required materials and ask the person in question directly. Some other stuff Music! If you've listened to Ozzy Osbourne at Blizzcon, hopefully you've developed a taste for more. I present you with: Finger Eleven. Just check it out. If it's not your thing, click it away. No (physical) harm in checking, right? Rock on!
at August 23, 2009