For the most part, WoW players are sheep. And not just any kind of sheep either, mindless drooling idiots that will believe anything and everything you say and take it as actual truthful facts. No, don't worry, there's no don't get offended just yet. Since you're reading this you've already proven you're to be different and unique from the general herd. Lets clarify with the use of some examples. Presume you're in one of the three high end raiding guilds on the server. Competition is strong, sometimes you get the first kill on a boss and sometimes the other guild will beat you to it. At the same time you're having fun and socializing with the other members of your guild, while the other guilds are doing the same in their collective green text environment. All good so far. A new content patch arrives and all the guilds on the server start trying to get the usual first kills. Your guild manages to kill the first two bosses and then wipe the rest of the evening on the next one. One of the other guilds kill the boss you spent all night wiping on, and just like you made a post on the forums showing off your first kill screenshots, they do so of their first kill screenshot. Nothing unusual right? Until, someone from their guild decides to make fun of the fact that you wiped on the third boss. One becomes two, two becomes three, and suddenly a whole bunch of players are crossposting over the two topics about who was first, who was better and then the real fun begins. Someone starts calling the other group idiots, losers, and plenty of other degeneratives that I'll leave to your imagination to fill in. A guild feud started that day, and competition for the next bosses will be even stronger. People from guild-A will refuse to group or Pug with people from Guild-B because they're idiots, assholes, can't play for shit, etc etc. Even if it's a new recruit from another server, or a recently leveled character from a completely different guild. As soon as a player has the Guild-B tag above their head Guild-A will boycott them. Why? Because most WoW players are sheep, cattle, herd animals, unable to form their own opinion. Comical 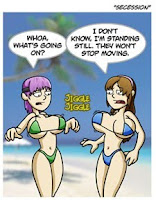 So, you may wonder were I'm going with this rant. It's not so much a rant as a thought that was raised on a not-so-recent discussion on the MMOC forums regarding Tim Buckley, the author of Ctrl Alt Del. As WoW players once again displayed the uncanny ability to act like sheep. Tim Buckley is an asshole, Tim Buckley is an idiot, Tim Buckley can't draw for shit, and the list goes on. So, I ask one of the ranters, "why" do you feel this way about him? His answer, quite blatantly came down to: "Because people said so". Wow! I mean, would you jump off a 20 story flat "because people say so"? I sure wouldn't. Me: Do you personally know him then? Him: No. M: So basically you came to the conclusion of him being an idiot solely on the opinions of other people? H: Well, yeah, everyone says so, it must be true right? Everyone says so. Rrrright. A perfect example of sheep. Now, I'm not going to say Tim "isn't" a complete asshole as I can't prove or disprove his character traits. In all likeliness he is in fact a complete ass, but since I don't personally know the guy I'll keep my opinion on him neutral. I refuse to act like a sheep. (Insert lol haha you're playing WoW just like 11 million other players joke here) But seriously, more people should stop and think about that. Your opinion is your own, at least take the time for come to your own conclusions rather than let others dictate your mind. Whispers from the dark Funny enough, I ran into another sheep myself while playing on my rogue some time ago. I didn't think to make a screenshot to show it off here for comedy value, but I think you'll get the idea. SomeIdiot whispers you: Asshole! Huh? OK, so, I'm not stealing anyone's mobs, I'm practically alone in the zone, and didn't gank or corpse camp anyone for weeks if not longer. What would this be about I wonder.. I shiftclick his name. SomeIdiot Level 58 (Some minor guild) - Orgrimmar He's not in my zone, probably an alt, and in a guild that I've never had any dealing with in my life. This should be interesting. Me: While I'm certainly not the nicest guy on the server,,, I highly doubt I've done anything to offend you recently. Why exactly would you then call me an ass? Him: Everyone in the guild says you are. /spit Me: And, everyone in your guild has known me exactly how long? -SomeIdiot- is ignoring you. Amazing. No doubt the pinnacle of human evolution. I did some asking around and had a chat with one of the more reasonably minded characters in that guild, and it turns out they were talking about evil raid leaders in the high end raiding guilds. A conversation apparently during which some 12 year old got so hyped up that he decided to whisper me. Sheep. Black sheep. I might be a judgmental bastard at the best of times, but if you do get on my shit list at least you'll know it's personal. So, ask yourself this. Do you control your own opinion?
at September 13, 2009

Ha ha, that trailer is hilarious.

As for the discussion I think getting hate mail is a sign you've made it. Tim Buckley has now got his second megathread in the something awful forums where they rant how much they hate him.

Congrats anyway on receiving hate tells, you must be doing something right!

I was recently asking a guildmember, after a nasty run-in with an idiot: "Why can't Blizzard make an adult-only server? I'd gladly pay the fee to transfer my main there." Her answer: "That would only take care of half of our problems. Adults can be asses too."

I too have run into those sorts of people. Most times I chalk it up to "kids being kids" and get on with my gaming fun. And then later, I find out that the idiot/troublemaker is 30-something. *facepalm*

And it's not just WoW players! I have to remind myself: a majority of the population are not the smartest individuals. They show their "intelligence" by agreeing with everything everyone says. They don't look things up, they don't read, they don't ask questions, they don't think for themselves.

And these people are procreating! Scary, huh?

Indeed. Well, even bad advertising is still advertising. I'd bet that if those SA forums hadn't given TB half the attention they did, his site wouldn't be getting half the visitor count it does today.

History has a way of remembering the biggest bastards, while the good guys are forgotten.

I agree that the sheepism of today is just growing to absurd numbers. It starts in grade school, everyone wants to be part of the popular crowd so they start wearing what the cool kids wear, saying what they say, doing what they do and hating what they hate. Add that with the fact that the average person nowadays is more stupid than ever and we have a pandemic on our hands.

Haha nice one Thomas, you nailed your frustration there on the head!!

The world is somewhat of a kindergarten at most times :)

"Everyone is a sheep!" High school must be tough.

"High school must be tough."

It sure was, but that's nearly 10 years in the past.

Just do it someone said!

When people try to be different they still form themselves into groups of sheep ie Punks, Emos etc

What you are talking about is not only sheep-behaviour. It's totally normal human behaviour and trained for over a few thousand years.

Every human identifies with his or her own tribe (guild) and fights against the common enemy. There's nothing wrong with that.