A dozen reasons why 3.2 sucks 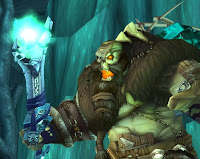 Emblems! Emblems and badges from 5 mans, 10 mans, 25 mans, there's no end to it nowadays. Emblems of Conquest drop like candy from every heroic that previously dropped emblems of heroism / valor. Meaning you can now buy ilvl 226 loot from dungeons you were previously struggling through in ilvl 200 gear. If that doesn't mean anything to you, just skip to the last part of today's post :P And now there's yet another Emblem added in 3.2 - Trial of the Crusader. These drop from the 10 man, and 25 man instance, on normal and on heroic mode. And you get 2 for doing the daily heroic as well as the new boss in Vault of Archavon. Way back when Karazhan, Serpentshrine and Black Temple were still the mainstream you only got 1 type of badge. Obviously there was a general outcry when higher level loot was made available for those low level badges you were awarded in something as simple as 5 man heroics. We figured blizzard was doing a better job when 3.x came around and there were badges for 5-10 mans and another type of badge for 25 man instances. The former allowed you to buy slightly lower ilvl items than the one from 25 mans. But, rather than maintain what instances drop each type of bad, Blizzard is again catering to the casual and social aspect of the game. Rather than change the gear you can buy with said Tier-1 badges, they now make those low level bosses drop higher level badges. This means you can't stockpile as much as in TBC but the end result is still pretty much the same. Free loot. And, being forced into the same 5 man dungeons you've been doing for nearly a year now to be able to keep up. Some will applaud this no doubt, others will not. The main grievance in 3.2 however, is the complete and utterly generic loot distribution system now in place for gear tokens. 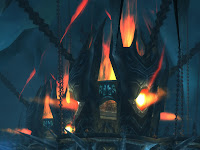 "Trophy of the Crusade" These drop from the new 25 man instance, and unlike the ulduar tokens can be used by any class at all. Less gear to disenchant you might think, and while that's certainly true you also need the aforementioned "Emblem of Triumph" in combination with these trophy tokens to be able to buy the 25 man instance armor pieces. Luckily the Hard mode 25 man instance actually drops 3-4 class linked Regalia tokens which don't need anything else. But hard mode is in fact "hard". So all those wow players who've been spoon fed over the last year and a half with easy instances and optional hard mode bosses won't know what hit them. If you're after the hard mode 25 man gear, good luck and hopefully you're in a high end guild. If you're in a mid level 10-25 man guild however, the easy / normal mode for the new instance is so damnably simple that you'll notice your average pug succeeding. Alts and casuals getting the achievement in guildchat. While at the same time you're sitting around being frustrated over the fact that you need yet another few dozen Emblems of Triumph to be able to buy the item you want. Technically you could be doing those 5 man instances that you're probably sick of by now, or do the 10 man version of the instance just to get badges. Badges, badges, badges, badges! I just want random loot without being forced to grind badges elsewhere. Making the badges a requirement for main gear rather than trinkets, rings etc off the side was imo a poor choice by Blizzard. Onyxia is a fun reminder of old times but the class specific gear (much like in VoA) will undoubtedly set some teeth on edge. So what do you do in a raid week? 25 man ToC, 10 man ToC, Vault of Archavon. And then, either 4-5 days of banging your head against the wall called "hard mode" and slowly watch the guild fall apart due to people who've been spoon fed with easy modes getting bored and leaving? Or, do you persuade your fellow raiders to go back into Ulduar - in which all the gear that could potentially drop is already outdated due to the new ToC instance - to farm the Legendary mace for your healers? Most people are bored of ulduar by now, and not getting any usual gear from there certainly doesn't help. How's your guild managing? Unless everyone "knows" that you're a casual lot, or zomghardcore you've probably got some trouble filling raids. Well, you can blame patch 3.2 Fear not! 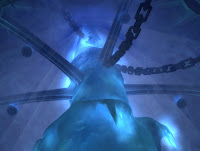 Patch 3.3 is available on the PTR and indeed Icecrown citadel, long awaited is available for running around in. Monsters and bosses don't give any loot yet but the items seen so far look very promising. It'll surely be a good change of pace over having every druid and rogue look the same, or every paladin, deathknight and warrior wearing the same gear with slightly different colors. See MMOC for some screenshots: * Weapons 1 + Dungeons 1 * Dungeons 2 * Dungeons 3 Iirc there will be 13 bosses inside ICC itself, with obviously arthas - aka the lich king himself at the end. Unlike the poor excuse of a dungeon that is the loot pinyata called ToC, ICC should prove to be a lot like Black Temple. Robokill I found this little gem on Armor Games: Robokill. It's a pretty well made top-down 2x shooter that should keep you going for a few hours. If you enjoy the short demo or already reached level 16, just google the "full version" on google or pay the meager 9.95$ for it. I'd recommend googling the full version though, as the game isn't very big and the max level is only 34. Poll end Q: What are you most looking forward to? * 4.x The Cataclysm! - 46 (48%) * Diablo 3 - 21 (22%) * 3.3 Icecrown + Arthas - 16 (16%) * Starcraft 2 - 9 (9%) * Other - 3 (3%) Pretty predictable results I guess :P Diablo 3 scored pretty high, sadly we won't be seeing more info about that until blizzcon next year, and an actual release as I suspect won't be until 2011. New poll up, are you sick of badges yet? * If yes, good for you! * If no, watch the video again before voting.
at October 04, 2009

I can't see your video at work, but for the casual gamer I am, badges are an excellent thing. They allow me to explore dungeons I couldn't have reached without them. It seems that you're more angry against the differences between normal and heroic modes than against easy stuff for casual gamers. To be honest, I've never understood these kinds of point of view. Sorry for my bad english and thanks for your great blog. A french rogue.

I myself used to be in a high end raidguild (Elysium on Aszune) until i recently decided i was tired of the pressure and the egos so i rerolled horde (typical Elysium fell apart a month later).

So now i've managed to gear up my new toon with badges loot that most of the upgrades come from ToC10 or up. Kind of an issue as the guild i am (which is fun & friendly) haven't cleared Uld10 even.
You might understand i welcome the way loot with badges work as i otherwise couldn't have gotten the kit i've currently have.
And if you think only raiders deserve the end-game gear, i disaggree. Sure, i can deal with full time raiders getting first pick but i'd like to have a chance on upgrades aswell in due time.. that's the whole point of this game aint it?

I don't consider myself getting the gear spoonfed either, i spend time learning my class, tweaking UI and addons, gemming and enchanting everything.. the fact that i'm constantly the no.1 dps during our guildraids does show i'm willing to do the effort right?

Actually when you think about it, it's pretty obvious as to why Blizzard is doing this - and by large the culprint is actually the whole notion that 25-man loot should be better than 10-man loot.

Okay, let me elaborate on that.

Starting with Naxxramas, Blizzard ended up in a situation where they decided to have two seperate tiers of raid loot - one for 10-man and one for 25-man; this is a significant difference from the past where Blizzard generally only has had one raid with one loot tier open at a time. Then along came Ulduar and suddenly there was almost three tiers of loot: Ulduar 10-man, Ulduar 10-man hard modes + Ulduar 25-man, and quick maths inform us that Blizzard has now used up Five raid 'tiers' across just two raids!

To that Coliseum has come along, which is a very quick and simple raid, and is meant mostly as an equalizing stuffing between Ulduar and Icecrown Citadel - and it too has three tiers of loot, and the bottom tier has to be sufficiently high that people actually get stuff out of it rather than just keep using ulduar gear; and they still want to give this time to alts catching up.

I can agree it's a tad boring, but it's pretty evident why they had to do something along those lines and what the underlying problem is, and I don't really agree it slights anyone. Except for the two triumph emblems per day (not that much compared to how much you can get from the Coliseum raid), the only way you'd need conquest emblems from heroic dungeons is if you've never gone further than 10-man Ulduar and thus didn't already have 25-man normal Ulduar loot and wasn't already drowning in conquest emblems.

To be honest, I think the heroic mode raid is interesting in a sense, because it draws a rather harsh line where you are on the raiding scale - whether 10 or 25 man, whether you can handle the heroic mode or not might suggest a whole lot about to what extents you (and your group) can handle potential future hard modes in Icecrown Citadel. That said, I still prefer the optional hard modes because then you have a bit more pick and chose option while you're actually progressing, but it definitely seems like Blizzard was intent on drawing a line and let people see where they are in terms of progression and what they can take on. If you've been tackling Ulduar hard modes up until 3.2, then Heroic Coliseum shouldn't be that much an obstacle - if you've just been skipping them because it's easier to, then it might be an idea to do the same with heroic Coliseum - it's just one long hard mode by design. That's the whole point with it.

It's not ideal, but by large 3.2 acomplishes what it's supposed to - it evens out the playing field somewhat in preparation for Icecrown, gives space for people to get alts up to speed fairly easily and really draws a line whether or not your raid will be ready for oncoming hardmodes.

Yeh, it's obvious why they're doing it. Can be frustrating when you're working on gear for 4-5 months then have it all become redundant while you're still in the middle of one thing.

Here's to hoping 3.3 will be better. So far it looks a lot like BT, wings an all.