November 01, 2009
bbr
4
And Halloween is over. Hope you got your achievements by now. Glad I did mine last year ugh. All but one that is. Though I suspect I'm not alone in that. It's just ten points anyhow, and not needed for the meta achievement. See MMOC for a bit more details. It's really a small "event" if you can call it that. Speaking of ten points, this sunday and monday you can get Dead Man's Party. It's quick, dead easy (haha couldn't resist that pun...) and there's a vendor that sells you an extra Cooking recipe. Personally I'm on 164/169, and in no more than two weeks time there's the Pilgrim's feast event starting that should allow everyone to get another five. * Cranberry Chutney * Candied Sweet Potatoe * Pumpkin Pie * Slow-Roasted Turkey * Spice Bread Stuffing 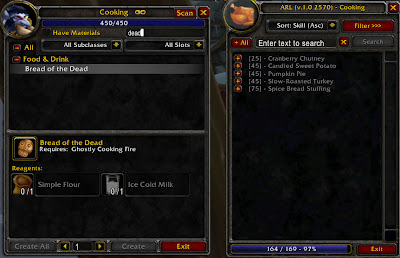 If you're only a few recipes away from Chef de Cuisine, those few might get you there. (Also, you get a cookie if you can guess where that screenshot was taken) Remember the Sunwell? Sheesh what's up with the silly puns today? The sunwell, I'm sure some of you readers have been there during the time that it was actually "hard" still, and not just a place to go to pick up an achievement. Back in that time it was rather controversial as it had a unique buff added by blizzard. Namely Sunwell Radiance, yeah that's a nasty buff. And, all bosses in there had it. Actually, not just bosses but every single mob in that damn instance had it. Blizzard's excuse at the time was something like "we've given you too much evasion, so this allows us to make bosses hit less hard". Something along those lines anyway. But it sort of made druids - who's main defence was dodge, rather redundant. Other tanks could drop dodge and start stacking parry and block, but druids, well, couldn't. Lots of unhappy players, but most still managed and got a good way into the instance before WotLK suddenly made the instance redundant. That's the way of endgame instances sadly. Blizzard makes them useless before you've really had a chance to do them proper. TAQ and Naxx back in Pre-TBC had the same issue. Anyway, I digress. The point being, that exact same damn buff is going to be active in Icecrown Citadel(aka ICC). Of course It'll be named differently, but it's the exact same buff. -20% dodge on all players, and mobs get an extra +5% chance to hit you. Basically it's like this. Players have gotten too much evasion, so instead of making bosses hit 2x as hard and potentially one or two shot any tank, they're killing your dodge so that bosses can hit you more often. This means they don't need to buff the boss' damage output too much, and they don't need to nerf our gear or evasion ratings either. (Like they've done to rogue agility etc) The reason to that was this - rogue tanks! One must miss those days *sniff* It'll remain to be seen whether this makes druids cry again. Patch 3.3, I don't know about you, but it's looking rather interesting so far. Hopefully we'll get a chance to complete it this time, yet, Cataclysm is getting closer, and THAT is also looking rather good. Oh the dilemma...
at November 01, 2009

I myself play a cat druid but i do tank now and then when required.
First thing this new dodge debuff did do was make me wonder how it would be for feral tanks.
DK's can Dodge and Parry, Pala's and Warriors can Dodge, Parry and Block.
Ferals can not Block or Parry... only dodge!

I haven't done my homework yet but i don't think Druids have that much more armor then the other tanks and certainly not that much more health like in the past.
This could mean Bears are gonna be extinct soon...

Some more dodge and a few K more health is about all I think. Armor is more as well, but not to the levels that they were in TBC - where bears would be having 75% reduction purely based on armor.

The picture was taken at the Argent Colliseum of course! We only did how many dailies of getting that goblin the same color of stones? lol

Correct ^,^ taken from the horde stand facing a bit left.