March 06, 2010
bbr
I've been farming some things the last few weeks, and O M G, blizzard is quite malicious in the drop rate of some of those things.. The updated stats: * Enchanting - Zurgat: 280/296 * Engineering - Zurgat: 240/275 * Cooking - Zurgat: 169/169 * Blacksmithing - Geshrat: 315/464 * Leatherworking - Targash: 343/517 * Inscription - Arthul: 419/440 * Jewelcrafting - Arthul: 264/554 * Tailoring - Elrath: 288/401 * Alchemy - Neruhe: 186/248 Still a long long way to go either way. And not stopping anytime soon. Reputations to raise, old dungeons to farm, vendors to pillage. Oh yeah. It's the world drops that really are the biggest pain to get though. Occasionally theres a noob that puts up a recipe for cheaps, but those are almost as rare as the recipe itself. Warning! Supposedly there's a new virus generation which specifically targets WoW users with the battle.net authenticator. It'll catch the code you type, send it back to the hacker, and send a false key to blizzard. Thus, giving hackers half a minute to log in using your credentials, while you will be told that you're typing in the wrong key code. It should be obvious that the authenticator will still keep you a lot more secure than you would be without it. But as always, if you got a virus, bad things will happen. Also see: this link. Nerfed some more I'm sure you probably noticed the +5% damage +5% healing buff "hellscream's warsong" when in ICC. Which makes most of the encounters a LOT easier. It's said to go up to 10% in a few weeks, 20% later, and ultimately supposed to go up to 30% a month or few before Cataclysm is released. To ensure everyone gets to do hard modes and get easy gear. But, that's not all! The 4 March update according to MMOC added a few more nerfs: * In the Lord Marrowgar encounters, the boss will no longer reset threat after a bone storm and will now wait a small amount of time before attacking at the end of a bone storm. * In the Deathbringer Saurfang encounters, the boss is now less likely to cast Blood Nova on targets affected by Mark of the Fallen Champion. * In both normal and heroic versions of the 10 player Rotface encounter, the mutated infection ability will not be cast as quickly while the fight progresses. * In the 10- and 25-player heroic Festergut encounters, the malleable goo ability should no longer target pets. * In the Valithria Dreamwalker encounters, the duration of Emerald Vigor and Twisted Nightmares were slightly increased. * In the Sindragosa encounters, the duration of the instability debuff was slightly reduced. Some of these seemed really unneeded. Ninja powah! 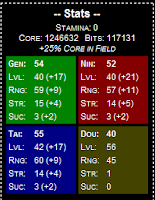 Also my Billy char just finished PizzaWitch on Crazy hard mode. Time to re-get the last two lost weapons and loop to Season 19 for great awesome points (Trophies / achievements in warcraft terms). There's less achievements to be had in total, but currently on 40, looping should get me another two at least, and unlock two more (for doing PW easy mode). Fear the ninja :P Fantasy village also needs more ninjas, come and join us! Also, my yummy r00t stats on the right. They're yummy, because I've just consumed 16 yummy pizzas. Hence the duo level is so high.
at March 06, 2010