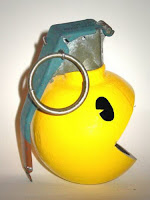 The slime is flo... nooooo. Man, if there was ever an addon that allows you to disable specific boss sounds I'd be all over it. Sindragosa would be at the top of the list. "As your mathetic magic betrays you", ugh. Anyhow, busy week, lots to tell. Fun Stuff Pacman turned 30. One of the early few video (arcade) games known to mankind. There's an achievement for you, WoW won't be getting close to that anytime soon. Although StarCraft has already marked it's 12'th birthday. Also, female worgen screenshots to be found here. Until May 24'th Valve is giving away the popular puzzle game based on the halflife engine "Portal". GO GET IT, IT IS AWESOME! All you need to do is install steam. Not so Fun stuff Depends on your point of view really. AVR is going to be disabled by Blizzard in the upcoming 3.3.5 content patch. If you're not sure what AVR is, then this link explaining what this "Augmented Virtual Reality" addon does should help. Basically, it draws big red circles around players and in your WoW raiding environment. Which, anyone will easily understand, is a very big advantage to learning and mastering a fight. If not simply making it redundant other than your gear requirements. Imo, it's a good thing. Raid warning addons, Grid helpers, healbot and decursive is one thing. Bigwigs telling you you're standing in the fire with a big red blinking text and marquee enabled will still require you to look for a better spot to move to. But drawing circles in the room, displaying in full high res red blue and green who what and where it's safe or not is just pushing the thin gray line into the dark black. It couldn't last. Upcoming Stuff

Aside cataclysm, which, is of course great and important news that everyone is and has been following. (with the alpha and beta and all that) There's something else upcoming as well. REAL CANADIAN VIAG... no wait that's the wrong email. Sheesh, spam seems to be picking up lately. Ah here it is. It turns out I'm allowed to give away another book! If you've been visiting this blog for a while (and hopefully a good while to come yet), you'll remember this here post where you could win a nice book about Arthas, written by one Christie Golden. Since then, I've read the book myself, and can recommend it to any dedicated WoW players. If you're not a WoW player, or at least have read some of the other warcraft books you will probably find it somewhat confusing though. Anyhow, about that other book. It's called StarCraft II: Heaven's Devils, written by By William C. Dietz. Which is obviously not a world of warcraft book but, if you're anything like me and enjoy reading english fantasy and sci-fi then this should certainly keep you entertained for a good few hours. Books are good, but free books are quite simply better. Right? At any rate, that's "soon". So, sign up for the RSS or just manually check back once a day or so. Tell your friends, tell your family, inform your guild, the usual. More on that later.
at May 21, 2010