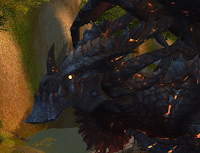 So, as you've probably heard, the WoW Cataclysm Friends + Family Alpha / Beta has started. Which means it's leaky time again! Seriously, even with a NDA, there will be people who get their hands on the data files somehow. And thus tiny leaks and plenty of screenshots will slowly start to show up on forums here and there. Like this image of DeathWing. It's "meh", quality. Hopefully it'll get updated and edited still. That image has been all over the MMOC forums though and you came here looking for more, right? Some juicy Cataclysm alpha leak maybe? Well it's still early, there's just not that much to be found yet. If I do run into anything though... Ah, and there it is! Lets hope their site holds out under the onslaught. Check page 3+4 on this site otherwise. (Warning, image heavy)
at May 05, 2010