It's been a while since the lastest computer related post, with one from 2007 in fact, and this painfully obviously need for an upgrade / replacement back in the way of WoW and raids.

My current PC is apparrently already about 7-8 years old, which is almost ancient over in the lands of PC hardware. To give you an overview, I'm currently running:
- CPU: Intel i7 920 @ 2.67 GHz
- Windows Vista 64 bit from 2007 - Even google chrome is giving me warnings about support for the OS being discontinued soon, and
- 6 GB Ram
- 500 GB Harddisk, which is pretty stuffed to the limit.
- 2 TB external.
- 600W - PSU from 2014 which is already a replacement from the original due to the old one failing to boot the PC any longer. In theory I can upcycle this one into the new PC, which was somewhat the idea back when i bought it 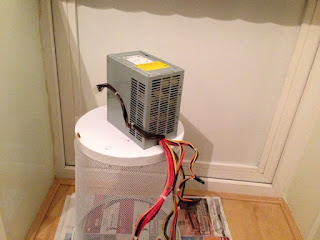 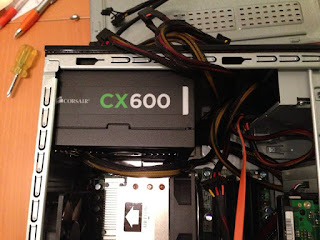 Now, you might go to your local computer store, media market or whatever and just buy an off-the-shelf system,. but to be fair that's what I've been doing forever. Every time some issue or other pops up later and while the system seems fast at first, it just bogs down, and the video performance degrades or just isn't quite "amazing" anymore.

Let's put together a "do it yourself" PC for a change. All loose components ordered from the local store, and online shops, then put together into a super frankenstein of a system. The end result should be better, faster and above all a fucklot cheaper than any HP, Dell or Asus you grab online.

So, the first step becomes:


How much can I recycle?

Generally when you want to upgrade your PC the peripherals can be left alone. Those are the bits n pieces any home owner can (and usually will) replace once every few years, with some exceptions.

Unless you have an old Commodore that still uses PS2 and simply different plugs than your new PC would, you can leave these alone and simply upgrade them when you feel they no longer perform as good as you like:
- PC Speakers - In my case a Logitech X-something 5.1 surround set. It still works, so why bother replacing it?
- Keyboard - I got a G15 keyboard sitting here, that although dirty and dusty still shows the expected letters on the screen when I press them on the board.
- Mouse - I'm itching to get a Proteus Core sometime in the future because the scroll wheel is starting to act up on my current G500, but for now it'll do. 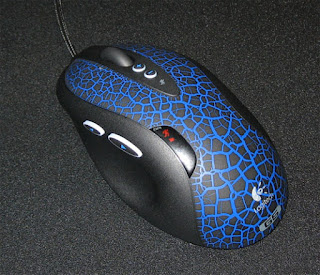 - Monitor - As peripherals go, this is usually one of the more expensive bits. If you're going to be gaming in high-res then you'll obviously want that video card to be able to display everything perfectly right? And do you stick to a single monitor, or go dual, or even more screens? In which case you'll need fixtures or legs for those things. For myself, the UHD with HDMI Dell monitor that I've got is still alive - and as long as it is, it'll save me an extra 200-300 euro price tag.
- Mousepad and printer if you have/use one. Webcam, microphone, cable management systems, extention cords. Heck, even your desk and chair might be considered part of your gaming setup.


What is your budget?

An important question obviously, since this will determine the hardware you can put together. Do you want to go modern but cheap, or all out?
Since we'll mostly be looking at the PC itself and skipping out on upgrading peripherals we'll go for a budget of 1500,- euros. Now, you don't HAVE to use the entire budget, but you should definitely not go over it. Otherwise, what's the point of having a budget in the first place after all?

When setting your budget ask yourself:
- How long do you intend to use the PC? Two years or five years before upgrading again?
- What performance do I hope to get out of it?
- Which components could I upgrade in the future to squeeze out an extra year or two?
- What are the important parts? Sound? Video? Storage?

I've settled for a budget of about 1500 myself. I want to use the PC for games, have a decent bit of storage, but don't care to run the most modern games on max FPS but stil be "oculus ready" just in case. Aside fan noise, heat, power usage the PC's location in your home will matter. Also, mine's in the living room so a few quiet fans would be nice.


What do you need for a functional system? 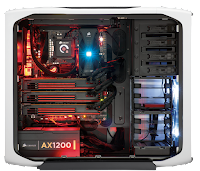 If you've never put together a PC, then this is obviously going to be the tricky bit, as well as a large part why most people will just prefer to walk into a store and ask the clerk to point them at a good system.
Most stores will try to sell you fairly average systems, use big words and make you feel insecure so you'll just agree with whatever they way. If you decide you don't want to invest the extra time to put together the system you want, with Grade-A components, and feel fine buying a closed box of surprises with mixed grade components then by all means go and do that. From my experience any store bought PC is going to show issues in less than 2 years.

You'll especially want to avoid low budget cases and supermarket deals when it comes to buying a computer. Support is zero, and the quality even worse. Don't do it. Get a Dell if anything, at least you'll get some support if stuff breaks down.

The basics:
- Case. How your PC will look from the outside, how much will fit. You could custom build it from LEGO which is awesome, but I'd still recommend using plain steel.
- Motherboard. Comes with onboard sound and network functions nowadays which are more than adequate for most users.
- CPU. Most will come with a stock cooler, but for a tiny amount you can get a generally much bigger & less noisy fan. Make sure it's not too heavy though, or you'll break your motherboard.
- Power Supply.  Because your system need juice to run!
- Hard disk(s). For storage obviously.
- Video card (yes it's optional, but HIGHLY recommended)
- Extra memory - Ram
- DVD player, and / or card reader. (Optional)
- Operating System. While not a physical component it "is" sort of important.

You can gather bits n pieces from NewEgg, Tweakers.net, Tom's Hardware and even Amazon if you're in the USA. I'll use Tweakers.net since it's well, local, for me.

So far I've got the following setup planned: 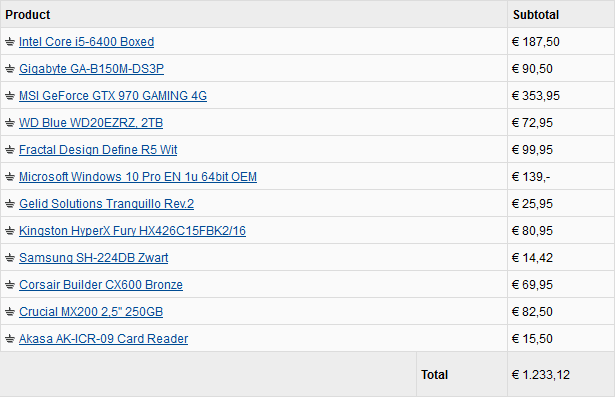 I can cannibalize the PSU from my current PC, so that'll cut the price down by about 70,- and I can scrape another 115,- off the price by getting a OEM Windows key from Kinguin instead of using a closed box retailer.

So the total on that would end up at around: € 1050,16 (note: excluding shipping)
Plenty of space to still add that mouse replacement, and well within the set budget. Still room for an additional video card if desired,. or upgrading the hard disks.

More later. I may tweak the setup a bit more and proceed to ordering, then I'll have some images to post about the build.
at March 13, 2016