So, that is day one done. Onward to day 2. Big recap post here on MMOC. Diablo 3 The video is interesting. The rest that was shown, is mostly old news. There should be some more stuff about D3 coming this Saturday however. Panda bears Where to begin... Basically, there's going to be an expansion added which adds more dungeons, more raids, a new race that both factions can use, and a new class which will be rolled by just about everyone and is going to roll on leather armor. We'd thus have: * 3 Cloth classes: Warlock, Mage, Priest. * 3 Leather classes: Druid, Rogue, Monk. * 3 Plate classes: DK, Warrior, Paladin. * 2 Mail classes: Shaman, Hunter. I anticipate the next class to be added will be using mail armor. Don't you agree? That is another year and a half away at the least though. Still, I recall blizzard writing something like: * The reason why we don't release a new class and a new race in the same expansion, is because we want balance. If we released a new class and a new race at the same time everyone would be rolling that exact combination. So instead of having a variety of players roll "race" warrior, shaman, rogue etc, the majority of new characters would be "race" + "class". And yeah, that is EXACTLY what is going to happen now. Mostly because Undead Monks would look utterly ridiculous. Not to mention gnomes, or dwarves. Or gods no,. Tauren monks. o_o No female pandaren shown yet, much like when the worgen were first unveiled. But,. they will be fat and ugly much like taurens in all likelyhood. Horde AND Alliance 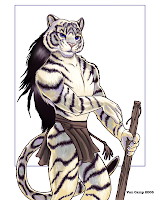 This will be the first race that will be playable by both factions. Imagine the confusion on PvP. Imagine the frustration at all the haters of the race who are unable to kill the bears by switching factions. This, really is just a clear case of lazy blizzard, or lack of available development time. I can just imagine the conversation that must have gone on at Blizzard Activision HQ. "OK, we need a new class for this expansion, anyone ideas?" "Let's add Pandaren!" "That is not even a class but a race, are you retarded? That was an April fools joke from years ago." "But then we could add monks!" "But if we add a new race, we'd need a different race for the other faction as well." "Why not just make it available for both factions? Would save us a ton of work!" And shit ensued. Whoever ended up actually agreeing with the original idea certainly shouldn't earn his Christmas bonus this year... If they are going further down the furry path - as they seem to be, they might as well have added Tigren - image top-right, drawn by Susan Van Camp. It would fit perfectly with the Asian like culture of the Pandaren, give both factions a new race and would allow them to utilize the monk class as well. I'm going to guess some dick at Blizz HQ saw this movie one too many times and stole just about every idea for the new expansion from there. It could have been less bad than it is slated out to be right now. But they won't be changing this stuff this late in development. I'll wanna sho yu mah pokermans!

So, another major feature of this expansion will be "pet battles". "Challenge other players’ companion pets with your own collection in a new tactical mini-game, and find out who's king or queen of the pint-sized battlefield." OMG, doesn't that sound exactly like the pokemon game we already heard so much of? Also, pet battles will be considered part of the level 90 endgame. Seriously just, what the heck. Blizzquote Q: What are companion pet battles? In Mists of Pandaria, we are adding a new tactical mini-game that will give the Snowshoe Rabbits, Mechanical Squirrels, and other cute lil’ companion pets players collect something to do other than stand around looking adorable. Companion pet battles allow players to pit their pint-sized pals against other players’ pets (or against special critters you come across in the wild) in strategic, turn-based combat. Pets will level up as they earn combat experience, and each companion in the game will have its own set of stats – such as attack and defense rating – along with unique abilities with their own tactical merits. During a pet battle, players will be able to swap companions out strategically depending on which pet they’re facing or what abilities might come in handy against a given foe. Pet battles are meant to be completely independent from your character’s main progression, and the rewards won’t offer additional advantages in regular PvP or PvE situations such as Battlegrounds or raids -- though they should help pass the time while you’re waiting for your group to recoup from a particularly nasty wipe. Say what? More distractions, as if recovering from a wipe didn't take long enough already. Now we'll have people messing around with their pets instead of healing, buffing and getting ready to go again. Uncool. Now, there is one thing that is somewhat unclear - they are referring to these critters as "companion pets" rather than "pets" or "vanity pets". This puts me to suspect you won't be using your current collection of 175+ pets. Though, there are enough pets there, and the numbers are coming close to the giant number of pokemon that some of you might have memorized. But still, there is still a fraction of doubt that is not addressed in the list of features. Pet Battle System * You will be able to collect, level, and battle with companion pets. * It will be accessible to all players. * Works with almost every pet * Pet Customization, you will be able to name your pet, give them visual abilities, etc ... * There will be "Wild pets", you can find them in the world and engage in battle with them. You will then be able to get that pet and add it to your Pet Journal. * Pets have random stats, some of them will be very good at tanking, some will have a CC ability, etc ... * Some pets will only be found during a specific season, while it's raining, or during the day or the night. Some of them will only spawn in the spring, when it's raining, in elwynn forest at night! * Most pets will become tradable, even after it's leveled, etc ... * Pets will be account wide * Your pet journal will display info on all your pets, including stats, skills, and also drop locations and lore info for the pets you don't have yet! * Winning battles earns you experience, and levels your pets. * You will learn new abilities. Every pet can use 3 abilities in a battle at one time. * Every time you level you will also increase the stats of your pet. * You will level multiple pets to build your team. * You have 3 battle slots, one for each pet in your team. Yes, pokemons Every.Single.Feature of this pet battle system is screaming pokemon. Now, I've got nothing against pokemon - aside that it's for kids who shouldn't even be playing WoW. But don't put this crap in my WoW and expact me to love it. At the same time though,. it couldn't possibly be worse than Archaeology. *groan* See here for more features listed in the BlizzCon panel. Talents v3.0

So, our entire talent tree is going AWAY and being rewritten, redefined, recreated from scratch. Instead, you'll get some passive / free abilities every 10 or more levels, and a "talent point choice" every 15 levels. rather than have the freedom to choose a wide variety of ways to spend your points in weird and amusing specs as was the case in Talents v1.0, or be forced to spend at least X points in 1 tree and then have 10 more points to spread around like in Talents v2.0, blizzard decided people weren't really using that freedom because a lot of people were using cookie cutter builds. Well DUH, if there is a best way to spec your character to do the most healing, or more damage then people WILL spec that way. So, instead they got rid of those choices entirely and invented Talents v3.0 where... you get 6 choices of 3 talent specials. In the case of druids and pretty much every other class you can investigate those choices and quickly notice that you now have even less of a choice than before. You will either pick a PvP talent, a PvE talent for DPS or a PVe talent for Healing (or utility if your class does not heal). GUESS WHAT? Every single PvP player will be picking the PvP talents, every healer will be picking the healing talents, and every DPS will be picking whatever talents result in the highest Damage on a Raid or instance boss. The trees are not final yet, but so far it's a sad looking affair. Realistically, the only way they'll get me to try this expansion, would be if they added a Real Money AH like Diablo 3 is getting. So I could sell my junk and be done with it. Also, the Mists of Pineapple website by blizzard.
at October 22, 2011

I am not even sure where to begin in how completely and deeply I disagree with you on virtually every point. I love almost every point. I will go with two of them. ;)

First, being in both factions is good. It makes sense. It represents the fact that it is entirely possible for a race to simply not strongly agree or disagree with either faction, and paves the way for the huge game-changing point in the war when some of the ancillary races finally say 'You guys are nucking futs and we're out of here'. Tauren, Nelves, Draenei, Goblins... None of them really has a strong investment in the core of the war, so much as they are supporting allies. Eventually they are going to realise their allies are not rational and will only accept genocide, and the only way the world will find peace (Much as this is World of WARcraft, at this point the war is really dragging into petulant foot-stomping 'We won't give in until they are dead!' views) will be for the sane people to step out and stop fueling the insanity with bodies.

The other thing is the talents. I feel a bit like we watched different things. You say people are just going to choose the PvP PvE, or Healing talent each time... But a core mechanic of it, and one I really felt flowed through on what they presented, was that you were never GIVEN that choice. You were given three different aspects of a theme (Here's three different subtle ways to effect your healing, or CC, or DPS) and none of them ever seemed like 'OMG that is the only choice'. And that was with the rough concept they have so far, before they have been fiddled with and even more balanced.

The system just doesn't seem to reflect your complaint, and they directly talked about your complaint and how they specifically were trying to NOT do what you say.

Not to mention you can change them relatively on the fly. So when one skill is specifically better in a situation you can just click a few buttons and have it.