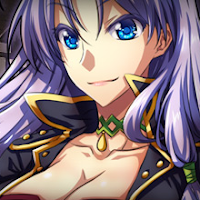 A wise man once said: "With Great Breasts comes Great Responsibility". Now, whether you find that a wise quote or not he should have said: "comes a large horde of teenage fan boys". I haven't even really started telling you what I was about to tell you, and yet I know for SURE you have been looking at the image on the right. You were, right? I knew it! The Game At any rate, I've been playing the Open Beta version of a game called Rusty Hearts. It is Free to Play and available on Steam. Like pretty much all Free-to-Play games it has some ways for you to spend money and buy in-game items to look better, get faster XP and be stronger and better than the other players who don't use their parent's credit card to buy virtual goods. The Good Even though it's beta, the game "as it is" it enough to keep you busy for a good few nights. The world is fairly small (one town with three areas) right now, but each area has access to one or more dungeons with several (4-8) sub-dungeons. Each available in up to four difficulty settings. Normal, Hard, Very Hard and Blood mode. 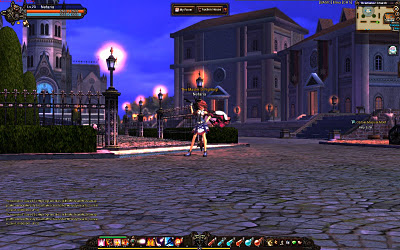 The game has an Auction house - though it's not yet fully functional. Or if it is, I couldn't get it working the way it should be. The controls are fairly easy to get use to - basically smash anything and everything as soon as it's off cooldown. And there are a ton of quests to ensure you always have a reason to go to each of the dungeons. Tons of items, stuff to craft, some mild comedy (card board cut-outs of some npcs), and several indications that the game originates from the Asian areas. The Bad Being a beta game is fine, and gives you an excuse for some of the bugs, random crashes, glitchy graphics, hopping npcs, and server downtime. The Auction house search feature not working, and Goldspammers going on and about their way for over 12 hours straight on the same character without getting banned, is pretty lacking. Either not enough GMs, or simply a low priority on the to-do list. PvP, due to the fact that you can "buy" a number of advantages PvP is going to be unfair. The advantages might be small, but in PvP it's the small things that will determine the outcome of a battle. Still, you'll quickly find PvP to be more skill based than dungeons. You won't win if you don't know how to block, dodge and counter attack a good opponent. And the ugly

The atmosphere would be great, if not for the fact that... you got people running around in teddy bear or shark costumes. Or with cardboard-cat head boxes on their head. Beside that, there are currently only three classes/characters that can be selected. Coming this October 25'th a fourth is being added to the mix. (As seen in the first picture up top) This will put the total to two guys, and two girls. Frantz, a sleepy looking half-vampire. Angela, a witch with (an) epic b.. ig sword. Tude, a werewolf, still mostly in human form. Natasha, a gunslinger with great big round b.. eautiful eyes. 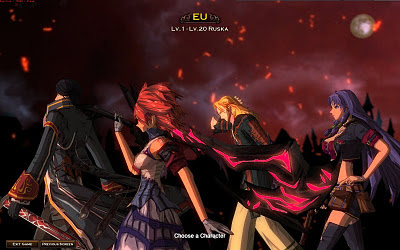 That's it. Beyond that, you have a wide range of craftable and questable customization to allow you to distinguish from the masses. Black hair, white, brown, blue, yellow and many other colors. Regular clothes, cowboy, drag-queen, vamp and many others. But you'll always be the same "character" as the others. One of four. Especially in the starter area, that gives people the creeps. But still,.. It's without question the game aims at the teenage generation of gamers. But, if you can look past the initial impressions (I assure you, It's pretty easy to do so) you'll quickly find the game to be a hectic and bloody fun hack-n-slash that will suck up most of your spare time. Plenty of epic b.. oss battles at the end of some dungeons as well, if that's your thing. And I know most of the WoW players will want some diversion from the endless daily quests ;) I'll let the screenshots speak for themselves. 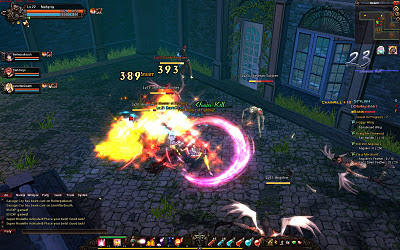 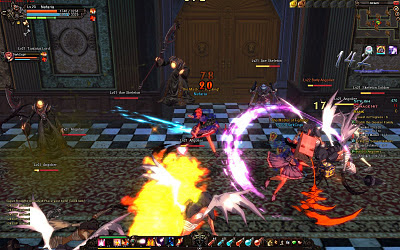 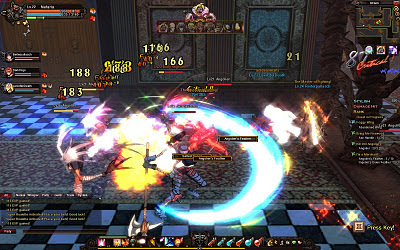 Lots of fire, explosions, and a tiny girl swinging around a Scythe twice her size.
at October 14, 2011