A truck of nostalgia - Secret of Mana

Most people will fondly remember their first console, and the first games they played on it. For myself that'd be an Atari, but honestly I've few fond memories of waiting half an hour for a game to load through a tape deck, making screeching sounds like a 14K4 baud modem. Only to fail to actually load.
No, proper fond memories usually don't start until your teen years, where you're young enough to have spare time by the buckets, and the clarity of mind to understand most of what you're doing. I was a bored teen, had some birthday money to spend, and a brand new Super Nintendo with a lack of games. Mother took me to a store in Amsterdam which specialized in games. Upon entering I was greeted by a WALL of many colors and games. To my young self it seemed immense, but looking back the wall was probably only a few meters wide. Still, after a short back and forth, the store clerk advised me to get this game called "Secret of Mana". It was to be the first action RPG I'd ever play and would re-play a good few times.

A piece of art

Opening the game would greet you with a hauntingly beautiful opening song, promising a green world, an adventure, mystic beings. I would prove to be all that and more. Nostalgia is funny like that, and you can look back at it with rose tinted glasses knowing the game was far from what you imagined it to be some 25 years ago, but for me it will certainly be a game I'd never forget. Square Soft, now Square Enix has since tried to re-create the game for modern machines, but not exactly succeeded. Personally I would recommend you play the original rather than the remake, or one of the newer titles. (See the end of this post for details)

You can play it with friends

Most RPG games at the time were titles like Final Fantasy, or Zelda. And while yes I've played both of those, they were in a sense limited. Great games none the less, but all generally single player. Secret of Mana was a three player game. You'd need friends, a bomberman controller splitter as well as extra controllers, none of which I had at the time - but a spare controller and a younger brother go a long way.
There's three characters. Simplistically put as Randy the swordsman, the character you start the game with. Primm the princess, who specializes in healing and support magic. And Popoi the sprite, who specializes in offensive magic. Both of which may be found in any order, but the game will force them on you in order to progress. Still, it's a measure of choice which gives you a sense of freedom. Not so much a set path to follow as much as a result of your own actions. Plus it adds a little replay value in seeing the alternative path to take.
If you're running the game in single player, the CPU will control the other characters and you can configure them to some extent. Aggressive/Passive, charge weapon or attack at 100%. The CPU won't use magic, so you'll have to micro-manage your team in that regard with the radial menu. Now, it should be very obvious that the current graphics of the version available on steam are nowhere near what the game originally looked like. Your super nes could do 3D, but certainly not to the extent of the modern version. In fact, the game had a built-in limit of three monsters on-screen at the same time. This allowed you to run past some content while being chased, and reach the boss areas wholly unprepared and under geared.
The original looked a bit more like this: 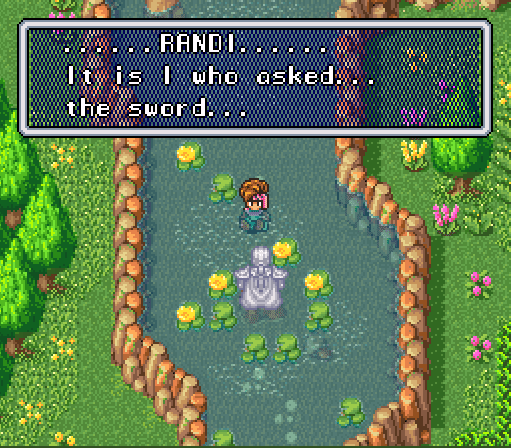 When you're used to playing a NES over at friends, obviously this 16 bit color depth was amazing! But obviously it doesn't quite compare to some high end 3D Ray traced graphics that we have available in 2021 - if you're lucky enough to get a graphics card, what with all the shortage and all...

Secret of Mana was in a sense a hack and slash game before Diablo 1 was ever a thing. And it might be part of the reason I enjoyed the Diablo series and game style. SoM allowed you to smack enemies with your sword with no real delay. Whack, 14 damage, 1 damage, 1 damage. To be sure, it wasn't the most effective way of killing a rabbit with teeth a street wide. (Monty Python reference there) But it would keep them down and prevent them from counter-attacking you. To really kill something quick, you'd want to whack 'em for 14, wait a second or two while your stamina quickly rebuilds to 100%, or overcharge your weapon by holding the button and dealing a powerful overhead attack.
The combat system is and was enjoyable diverse, and you were in "control". If you did something stupid, like stand in front of a critter and let it counter-attack you, well that was just your own dumb fault. In games like Final Fantasy, you didn't really have a choice. You attack - you wait your turn. Don't get me wrong, I enjoyed the heck out of Final Fantasy 1-7, but turn based combat gets stupidly boring if you are thrown random encounter after random encounter to slow your progress towards the end.
Boss fights are a little trickier however. As you can't really avoid the boss casting big spells at you, while you need to buff, charge your weapon to deal a big attack and micro manage your counters, heals etc. It can be fun chaos. And you can always run back and forth between the different towns to gain some more XP and train your weapons and magic. Upgrade weapons and gear, buy consumables - there's a lot to manage.

Once you've finished Secret of Mana you'll enjoy knowing that Secret of mana was actually a "part two" in the mana series. Part one was supposedly called Final Fantasy Adventure. Yep, that took me by surprise as well. Mostly because there was a Seiken Densetsu 3, later known as Secret of Mana 2, which was later re-made and released as Trials of Mana on the PC. Still with us? Because yes the numbering that Square Enix did was just,. weird. They also did a Legend of Mana on PlayStation and also recently got a remade for PC. And beyond that there was Children of Mana, Friends of Mana, Heroes of... Circle of... the list goes on - Most of which passed by my attention if not for the wiki. So I can't really tell you much about those - but there's a LOT.
One noteworthy in the SNES era however, also by Square - is Secret of Evermore. It's not the same universe, but the gameplay is very similar to SoM. It's using the same engine, 2 player mode, and just a wholly different game - but worth looking into. Advertisements for it at the time were - wildly weird though. 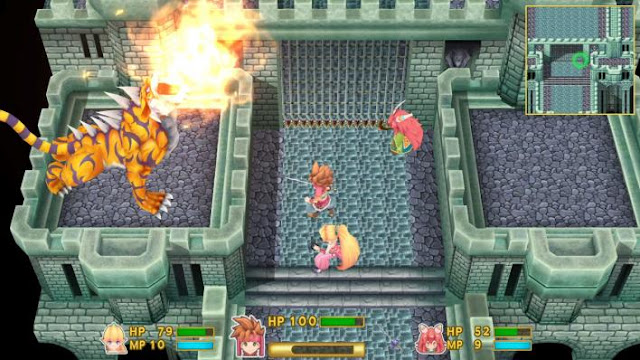