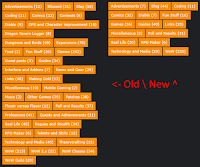 A bit earlier than intended, whoops.
But here we are. Dark and refreshed. The old theme had about 25 errors on the console, 5 warnings, and 1 message. It also had a page load time of about 5-8 seconds.
The new page loads in about 750ms (less than a second). I do say that's a nice performance upgrade.
Since the old blog layout was mostly intended for WoW, it also had an absolute CRAPTON of labels which were more or less redundant. If this was a wiki I'd be using subcategories, but since we're not - I'm getting rid of a large chunk of labels and just replacing them with "WoW". It's mostly old content, so nothing super important. You can still find all the content in the archive on the right if you're keen. We may replace/remove a few more labels later, but for now, Welcome to the new layout! :)
(It's not done yet, due to the whole "whoops" that was supposed to go on the test page and not "live")
at May 25, 2021