Imagine, you enjoy playing Warframe. A 4 player short or long missions out in space. Shoot aliens and get the loot. Aside that, you enjoy digging for gold and other minerals just like in Minecraft or Terraria. Well, Deep Rock Galactic (DRG) is kind of the love child of Warframe and Minecraft in a way.

It combines the "up to" 4 players mission style and shooting aliens with a large, randomly generated cave system full of precious minerals. Best of all - the rough and easily irritated drunk dwarf sounds. "Now where is that damn mine cart?" or "(censored) I've got a pebble in my boot!". At random intervals as you are progressing through the missions really help bring the gruff characters to life.

The caves of Hoxxes 4 are full of aliens called the Glyphid, Mactera, Naedocyte and many more. You won't run out of targets to shoot anytime soon - but try not to shoot your fellow dwarves. Friendly fire is ON and it IS a cooperative game!

A little silly now and then

Deep Rock Galactic is the corporation and/or space station on which you arrive as a fresh dwarf. The space station has barrels littered around which you can kick (because you can) as well as bar for some classic ales and stouts. Try not to drink too much and get yourself killed. Management would not approve. Please also do not dance at the bar, you are not being paid the hour. Hopefully you are a better miner than a dancer.

The base game is fully playable with no restrictions. You can optionally get some DLC for extra character customization options. The total number of base customizations is quite large though, and many more may be found or crafted after discovering them in missions. You can customize your pickaxe, guns, sidekick and obviously your dwarf with dozens and dozens of options to choose from. Bigger beard, smaller beard, yellow red or orange beard. The list is very long.

Characters have fixed naming references to certain objects and characters. If you've got the beast master perk, you can tame a low level Glyphid grunt and it'll follow you around like a puppy. Your dwarf will call it 'Steve' no matter how many you tame, it'll always be called 'Steve'.

Then there's Molly the mule (or Mining Utility Lift Engine), Doretta the drill dozer (escort missions) and the mysterious character named Karl. Karl will often be named as though he was a lost dwarf. A legend, one of the first explorers now lost in the caves.

And finally Bosco, the robotic sidekick/miner/ninja which will help you on your solo missions. A very helpful little robot. 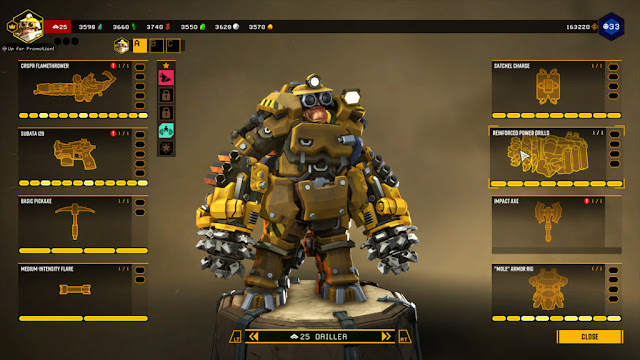 DRG has four classes from which to pick and play. There is no restriction to which you can pick. So even if another player has already selected the Driller class, you are free to pick a driller as well.

Driller; As the name implies can drill rather than mine using his pickaxe. Has access to a flamethrower and explosives.
Scout; A quick and agile class with a personal grappling hook and assault rifle. Also has a flare launcher to light up cave ceilings.
Engineer; Can build stationary guns and recall them when needed. Can build platforms and wields a heavy gun.
Gunner; The main DPS. How about 4500 rounds of depleted uranium in a minigun? That should clean out aliens nicely. Also has a zipline rope launcher.

Each dwarf has a set of basic gear which allows you to explore the (usually) dark caves of Hoxxes. Throwable flares which slowly recharge. A primary and a secondary weapon. Throwable grenades and a utility slot which makes each class unique.

So, while you're free to pick the same class as everyone it's usually recommended to build a balanced team. Having flexible utility will help speed up the mission, clear the aliens more effectively and allow you to mine more minerals than you would alone. 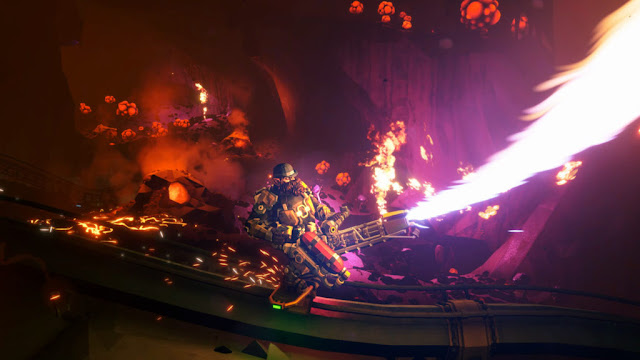 Currently there are a few different types of missions. Each with their own type of objective and gameplay as well as expected duration and rewards. A short mission will take you about 15 minutes, while a long mission can take as much as an hour of your time. There's no backing out mid-way if you want the rewards, so play your time carefully. Solo missions can be paused, multiplayer missions can not.

Mining; Go into the cave, mine X amount of Morkite metal.
Egg hunt; Retrieve a number of alien eggs. Management may enjoy the taste.
Refining; Liquid Morkite extraction. Build a refining rig and connect the pipes. (see the above image)
Salvage; Another dwarf team failed their mission, retrieve their M.U.L.E.s
Extraction; There's rare gems to be found. Similar to egg hunt but you have on-site cannons to help you.
Escort; Guide Doretta to the center of the cave where a heartstone is waiting to be mined.
Elimination; Find a number of giant egg sacs and kill whatever comes out of them. Basically a boss run.

And then there's deep dives. Deep dives become available once your first dwarf reaches level 25 (red bar) and is promoted once. The deep dive mission type is basically 3 normal missions connected in a row. Make sure you've got a good bit of time available. Deep dives have their own special rewards however, and are the only way to get certain customization options and overclocks with which you can improve your weapons. 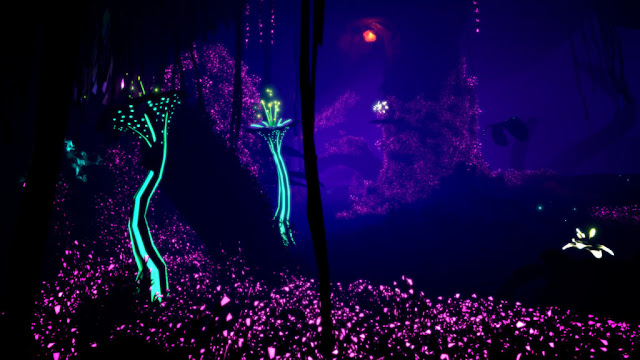 Try to enjoy the scenery. Hoxxes is generally a dark and dangerous place, but it can be beautiful. Some caves are lit with bioluminescent plants, and these can take your breath away. Literally, as some of those plants will try to kill you.

Currently on update 34. The game is still receiving new patches with extra content and balancing and has an active discord community for cooperative team play grouping.

This game is currently on sale on HB