Home » Comics » Not in my fridge!
Comics

Not in my fridge!

A few months ago I took up drawing, just some doodles mind you nothing professional. And i suck at it, i can freely admit that much. But still, the result is funny enough to share. If you don't know the comic Fridge Pals yet, then have a look. It's basically about the life of a can of coke and other fridge residents. I did some drawing for the heck of it, and ended up with this.

Maybe you'll think twice about stacking cans in your fridge now. Click below for larger version. 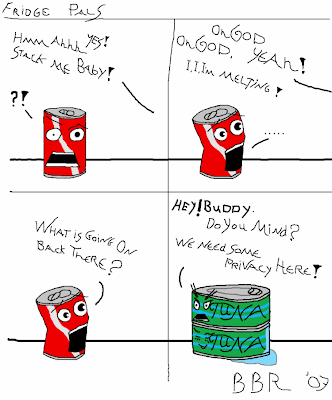 Aside some posts about hunter pets the site is going to get a spring cleaning. I'm planning to grab the current CSS and Divs then strip it down to a minimalistic sort and give it a seperate CSS document. This will reduce the CSS total size, and allow your browser to cache the CSS rather than load it afresh for each page, hopefuly this should improve page load times a little.

That was some pretty heavy html talk which hopefully didn't fly too far above your heads. But just to make sure you get the message, here's the short version : I'm going to make the site faster, fix alignments, and make it easier for myself to customize the layout. See it's a pretty neat thing when I put it like that.

Sadly I can't fix everything that's broken due to blogger having it's own set of code running a rampage straight trough the design as well, but it'll be an improvement at least. Don't worry about the blog breaking down, i'll do the first bits of research trough the google pages and the test blog i've been abusing as well.

Anime fever is a free anime host. If you don't have an account yet, go and make one.
I can highly recommend you look for the following :

My tastes may vary from yours, but heck. Go watch them anyway. There's also a post on the Blog Azeroth forums with a bigger list I posted, but you need to be registered there to see it. I got a bigger list up there.
at March 18, 2008

I agree wholeheartedly with your anime choices, at least the ones I've seen from your list, and I will be checking out the rest as it seems we have similar taste. Maybe I'll include a post about anime on my blog soon too.