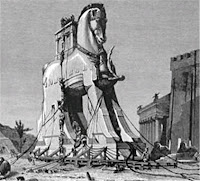 Seems even after verbal confirmation of having found the perpetrator a week ago, wowhead, thott and alakhazam are still affected by a trojan in their advertisements.

If you haven't gotten firefox and/or noscript by now, i highly recommend you add the following lines to your hosts file :
127.0.0.1 xpantivirus.com
127.0.0.1 ad.yieldmanager.com
That's it. Best i can do for you for now other than telling you to find a different browser or database site.

The wowhead team is hard at work trying to find and remove the offending banner, however it seems to be a difficult nut to crack and they might remove advertisements completely until the issue is found.

Quote :
I've been tearing my hair out trying to find this ad and get it pulled. The trouble is that the redirect code is hidden in a banner ad that, unless loaded in an actual webpage, looks completely innocuous. Not even our ad serving providers know which banner it's located in--if they did, it would be blocked by them on their end, they don't allow this kind of thing either. I promise we're trying. If we can't track this ad down soon we may have to pull all advertisement from the site entirely.

Good thing i'm wearing old pants, as they're covered in paint. Actual paint, white, blue, etc. Not that silly windows application. No doubt i'll get them even dirtier tomorrow afternoon as i'm far from done with the apartment. Ugh, arms hurt in places they never did before. Ah well, i'll add some pictures later for those interested. Plenty left to do.

Also seems i got a gas leak in the kitchen, which is less funny as the previous owner did not bother to mention this...

Someone asked me today, how many people you need to kill onyxia.

It took me a bit to recover from the stun, but aparently some people actually have NO idea about this boss and have only seen her on movies where obviously there'll be 30-40 people pounding away at her. It's not really surpsising when you think about it, as after 2.4 she'll the only raid boss left with any attunement worth mentioning.

Anyway she's bugged currently in 2.3.2 as i'm sure some of you will be able to verify. She doesn't seem to properly aggro the tank, and just runs around her eggs. Quite weird. If she were fixed though, (no she won't do deep breath more often) she should be doable with 3 people, maybe even 2 if you're really crazy. 4 should be a nice and smooth kill however.

If you don't have the drake fire amulet yet, i highly recommend you look it up and try to get yourself attuned. A quick 4 man kill of onyxia is a 15 minute job, and awards you with a good 35g per person.
at March 08, 2008

Easily doable with 2-3 people @ level 70. I do it weekly with my friends for the free gold. Bear tank, pally healer, and shadowpriest make for an easy time of it, although Phase 2 can be time consuming with only moonfire spam and SW:P to bring her down.

Protect my computer and eliminate the bugs and viruses.
When you are searching for a great scan that can help you keep your computer running like new, I would suggest that you visit http://www.Search-and-destroy.com. Here I found the antispyware solution from Search-and-destroy and it was exactly what I needed to protect my computer and eliminate the bugs and viruses that would make it run slow, freeze up and shut down. Search-and-destroy Antispyware was the answer to my computer bug problems and it was certainly worth every penny I spent to have this great antispyware to protect my PC. Not only does it work great but it cost less than many of the other scans available.