March 02, 2008
bbr
3
I finally managed to get a group together for Blackwing Lair and finish both the quest for the [red crystal shard] and the last of the 8 sections of [Draconic for Dummies] which is part of the blue shard's quest line. This meant the other 7 sections i have could finally be bound into a book and save me a good 8 slots of space in my bank. These were filled soon after... 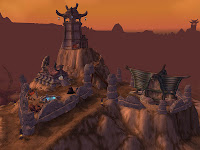 A few months ago i got the silly notion to grind my [brood of nozdormu] reputation up to neutral. It was saturday, i was bored, you get the idea.

Once that was achieved, three quest lines opened themselves up and i got started on progressing those. At some point in the blue crystal's line you are sent into Molten Core, which we did. Unfortunately we had to kill ragnaros twice because loot mode indeed had to be on free for all to pick up the draconic section.

Good thing the crystal shards didn't require loot to be on FFA, or i'd have to go into BWL again...

The draconic for dummies was split up in 8 sections. The first 4 could be soloed, another needed a bit of help to grind. The last three were in the hands of ragnaros, onyxia, and a table somewhere in BWL. So, in the end the first seven have been sitting in my bank for about two months. Something had to be done. 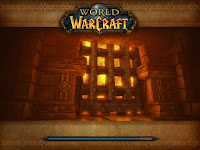 I started inviting at around 19.45, and it was a painfully slow half hour before we finally got 20 people together. Soon we had another few people join every so and then but in the end we didn't get started until 20.30 or there abouts due to summons.

At 20.45 Razorgore was the first to fall. I'll leave out the obvious swearing words aimed at blizzard, but even 2 months after first reporting this bug the fucking encounter is still bugged !!

Once Razorgore dies, for some reason phase 1 started again, and indeed kept spawning, and spawning, and so on. Since some of us have seen this problem before we knew of only a single way to fix it... Spend 35 minutes in Molten Core to force the instance to soft-reset.

We went in and got up to lucifron with about five of the 25 players AFK. Due to some miscommunication or plain stupidity i'm not sure, but we pulled a pack of dogs and lucifron at the same time. I suppose i should have explained before starting that all the dogs have to be killed at the same time, or they will start resurrecting each other.
People were being mindcontrolled at random, cursed, and general panic ensued. We just decided to kill lucifron's adds, then lucifron and offtank the dogs until then.
Suprisingly nobody died, it was almost impressive. 21.10 lucifron was dead, onward to Maggy.

The dog packs up to magmadar have always been messy, again so today, for obvious reasons. I won't bother too much with the details on that, but 9 minutes after lucifron was enough for Magmadar to take a long nap.

We were getting warmed up now, and started chain pulling the rest of the way down.
Gehennas went down at 21.28 so we were up to our 35 minute shedule. Time to head back to BWL.

A Minute or few before we went up, i got a GM reply about my notification of Razorgore in BWL being bugged. Biggest waste of time ever, the guy basically stated :
* We're aware of the issue and it'll be fixed asap. (Thats the same thing you guys said 2 months ago... and it's not fixed yet, go figure.)
* Anything else i can help you with? (No, obviously you're not having a very good saturday evening or feeling very helpful, so not going to bother.)
* [insert bullshit roleplaying farewell here] (Whatever.)

Indeed the Razorgore encounter had reset on it's own. Half a frigging hour later, but oh well. Also, people ran into Vaelastrasz' room and scared the goblins away, as usual.

Nobody talked to tbe boss without being asked, so i was able to start the [Red crystal shard] quest at least. I don't really expect to see the green crystal at least until WotLK, but it won't hurt to have the red crystal if i can get it today.

We didn't wipe, but somebody didn't move and blew up half the raid when his health reached zero! Also, Rogues can tank, they just need to rotate the boss faster so he doesn't breathe flame on all the rest of us poor melee --_--

So, it was 21.44, the timer is ticking and we got all night. With the dps that we've gained in TBC clearing the room was pretty easy. A short explanation on where to tank the boss and we were off.

A quick warning for whoever intends to do this boss in the near future, the head is bugged. Make sure you put loot on free for all. I've already done the quest, so i couldn't see the head, but loot was on ML-epic and those who could see the head reported that they could not loot it.

We cleared two packs, then pulled the boss into the proper location. Tank went down at around 80%, boss killed the melee, and wiped the raid. What went wrong? Everyone sort of forgot that tanks need the [Onyxia scale cloak] for this fight. We spent a bit of time clearing the rest of the hallway where the boss patrols while some people went to get their cloak. Poor planning I know, but we were here to have fun, it's impossible to think of everything up front.

The second try went much smoother, the aoe fire aura was pretty much non existant and the boss dropped some neat purple shiny items that some lucky players could show off when they are in town.

Draconic for dummies, right there on the table in the corner to the left after the three large dragon kin. /cheer

Before pulling the boss, we got a few people the [Smelt elementium] recipe. We were here anyway.

The boss himself was a pushover, even if a tank got the debuff, the combined dps that we had running took him down at 22.45

As you may remember, without at least two hunters this fight is pretty much impossible. Not so in TBC gear. We had a single hunter, so he had a big job, but even so the boss managed to enrage quite a bit. Aparently, even though the boss is considered level 73, his spell is not and you'll resist most of it.

We gave the hourglass sand to the tanks and tanked the big puppy in the doorway. There was some confusion about dispelling which almost had a nasty side effect, but that was soon taken care of. However, the tanks died. Positioning problem most likely.

Oh no! Would we wipe on Chromaggus? One of the surviving DPS warriors pulled out a shield and saved the day by tanking the boss from about 40 - 3% before dying to a lack of heals. The boss then rampaged trough the raid killing everything and everyone as his health dropped agonizingly slowly down to 1% ...

With only about 4-5 hybrids left standing, the boss dropped to his knees at 23.02 and the crowd went wild ! 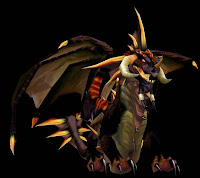 Rather than splitting up the raid and wasting precious time explaining more than the basics we all bunched up near the throne's base. Plenty of time left for the red crystal quest. We did a quick count, and came up with a grand total of... about 10 cloaks out of the 28 people in the raid. We pulled anyway.

A number of people got behind the throne before the boss unleashed shadowflame on the raid. We figured we'd try outhealing it, hah! Only a token 12 or so players stayed alive, but it was enough.

A druid ended up tanking the boss, in catform during one of the phases even. The priests were very well organised and even with getting a priest class call twice they managed to stop healing in good time to avoid the debuff.

The boss also did two or three rogue class calls, each time either directly after a fear or trough pure skill of the tank, but we didn't get stuck to the ground a single time.

I disenchanted the stuff that we didn't take along and distributed those items of interest to others. Shards were handed out by rolling 1-28 and a good few people got something useful out of the night. The head was looted at 23.22 and placed on a stake in Orgrimmar shortly after.

Sadly we don't receive a buff from it above level 60 anymore...

* Red : Obtained.
* Blue : On "the good and the bad news". Need 7 more elementium ore, ouch.
* Green : Haven't started yet. You need to farm green dragonkin around each of the world tree portals. Rumors go you can spend 2-4 hours on this for each portal, and respawns are dreadfully slow. Hopefully this will be soloable at level 80. I don't think i'll bother with it until then.
at March 02, 2008

"People were being mindcontrolled at random, cursed, and general panic ensued."

Nice account. My Mage would like to go BWL for Broodlord's head. I've got almost every cooking recipe in the game except for the cake and Dirge's Chops.

Alas, not likely to happen in the near future, especially as in a PuG my chances of acutally getting the head before someone ninja's it are between zero and null.

Old skool BWL... if only something slightly usefull would drop so we'd be willing to waste valuable raidtime there. Still, would be alot of fun :)

Actually, one of our (main) shamans got the T2 bracers from this run.
This gave him the 3x set bonus, which improves his chain heals by quite a crazy lot. He's a happy shaman now :P

It wont do much on boss fights of course, but on trash it's a great boost to his healing totals.