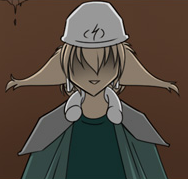 I mentioned the top two ranked comics on TWC earlier, and Two Kinds is generally second, sometimes first on that list. (The other was Goblins)

Two Kinds has been running since about 2003, and the art (like most long running comics) has evolved. The fun part in this case, is that the author started the comic a the age of 15, now 23 - and the comic has grown immensely - as it's rank on TWC shows. Be sure to also check his Deviant account.

It is a furry comic as the dominant races in the world are Humans, Keidran (cat people) and Basitins (dog people). There are dragons as well, plenty of magic use and, well I don't like summing up too much. You should simply read it ;)

The comic starts with the main character waking up with memory loss in a grassy field, soon he becomes aware of one of the other main characters in the comic - Flora, who will grow into the role of his girlfriend later on. As the story progresses Trace (the lead character) shows to have a dark past he dimply remembers.

They travel together and meet up with various other characters, some of who will travel with the pair. As the story progresses Trace will recover more of his past's deeds. Good and bad alike.

Two Kinds is a cute adventure / love story on the co-existence and respect between races. In this case Humans, Keidran and Basitins. The art is colorful, and the magic is very nicely done. I can highly recommend checking it out.
at August 13, 2012

Two Kinds is one of the few kickstarters I participated in, and I wait with bated breath for the digital copy of the comic it got me. I do not identifty as a furry, but I do love anthro art and characters and know more than a few of them. But it is a wonderful and amazing comic!

(captcha is annoying, giving me one word I can't read.... And a picture?)

Yeah, the new blogger captcha can be annoying. I've looked into it- but it's not even possible to remove it seemingly.