Out of all the webcomics on the web, few can get away with Stick figures and black and white coloring. XKCD does however, and it does it very well indeed. You'd have to be a bit of a geek to appreciate some of the jokes, but if you do get them. Just, wow. Occasionally the author puts together such complex jokes it makes you wonder where a person gets the time to put it all together. But when you understand it, you will appreciate it all that much more.

It's a black and white comic for the most part, but colors and even animation is used so and then.

XKCD could be considered a comic for the smart people among us, but that doesn't mean you're stupid if you don't understand the jokes. It just means you aren't understanding the complexity of the fine art of the joke that the author put together ;) 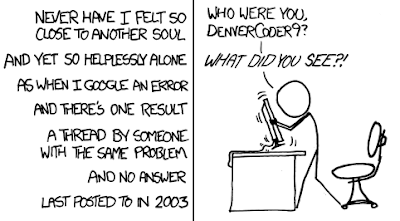 Do not be discouraged by the fact that it'd black and white, this comic is a masterpiece of the internet that is soon approaching it's 1000th update. Read XKCD now!
at August 13, 2012