Two posts today! how about that eh?

MMOC lists that the 2.4.2 is on the PTR, and oh so surely there's some new things you'll be interested in. I think it's a viable assumption that 2.4.2 will be on the PTR for a couple of weeks, and coincide with the activation of arena season 4. Perhaps not though, but it's always fun to speculate.

* All 23-hour profession cooldowns are now 20-hour cooldowns.
* All 4-day cooldowns are now 3 days, 20 hours.
* The Cooldown on the Void Crystal > 2 x Large Prismatic Shard transmutation has been removed.
* Brilliant Glass now have a small chance to contain an epic gem, and no longer requires a forge to craft. And the market price of green gems skyrockets even more...
* Haste gems added to the Quel’danas vendor.

* Goblin Jumper Cables are no longer a trinket item. Weird, i could swear this is already the case.
* Most Main-Hand weapons are now One-Hand weapons, not sure whether this applies to healing weapons however. blizzard did a similar thing when TBC was released, but proceeded to add restricted weapons afterwards.

* The hunter pet ability Growl will no longer scale with pet Attack Power. This makes a sad day for boar pet tanks.
* A number of skill and sound fixes.

Again, nothing about the chat panel saving it's settings properly >_< bloody annoying! 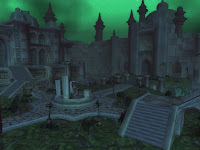 The new arena prices have also been listed.

When Season 4 begins, Season 3 items will be reduced in personal and team arena rating requirement to:
* Shoulders: 1950
* Weapon: 1800
(Only 50 points, how bloody pointless is that?)

In addition, some of the Season 4 quality items that will be purchasable with honor will also carry a personal and team arena rating requirement:
* Boots: 1700
* Ring: 1650
* Bracers: 1575
* Belt: none
* Necklace: none
* Trinket: none

RRVS is obviously not the only wow related blog in the world, heck i'd be surprised if it was in the top-1000 english blogs out there. Though as most we are constantly working to become bigger and more badass!

Either way, if my two posts today don't satisfy all of your reading needs, here's some more to keep you busy :
* 4Haelz has reached the suggestive number of 69 posts.
* Banana shoulders, there is no such thing as "too much" wow.
* Backstab looks at Vashj after formatting his computer
* Birdfall when alliance and Horde are friends
* Evil sheep is back in action.
* Fulltime wow addict writes about agressive guild recruitment.
* Just a wow girl on (shape) shifting into character.
* Kestrel found a nice firefox plug-in called ScribeFire
* Matticus gives you 10 answes for the clueless raiding (holy) priest.
* Petopia has recently done a site redesign.
* Pugnacious priest shows you how to make a quick n dirty guild banner.
at April 23, 2008

Heeey - thanks for the linkback ;)

and jeeez S4 costs a bomb, at least the personal rating stuff will keep some of the pve'rs outta that gear :D