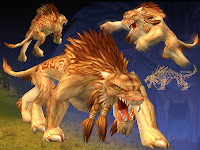 So, I made a druid. Huhh, you whaaaaat?

Just like that, I made a druid. It's actually my second one as I abandoned the other (nelf) when he was level 27 or so. Not many will know this but there's also a lvl 60 paladin, a lvl 13 warlock and a lvl 43 rogue on my character list. However, that was on another server, and another account. I think it was the US server whisperwind or such.

YOU HAVE A PALADIN?

Well, I used to. But as stated, that was on another account and those were alliance characters. I doubt I could transfer it over here, and even if you could.... What use would an alliance character be to me at this point in time? Not much.

So, at any rate, I've been looking at a bear butt for the last 3 levels or so. My game experience is better than it was 3 years ago and surprise surprise the bear does more damage than the lvl 27 nelf did. But that's kind of a given if you equip proper gear. Stocking up on int and spirit really doesn't do much for cat form eh? And a 30 dps weapon may be cute, but a 20 dps weapon with +10 str will do a lot more for your cat form. But such things you learn over time. So we'll see where this character ends up at.

I know it's "yet another alt". And I don't really have altitis. But there are reasons, two in fact, maybe even three.

Firstly, I believe that by playing alternative classes you'll gain knowledge which will benefit your main. You'd be better able to understand the limitations of your tanks, healers or dps raid members by having played said class at least up to 40 or higher. Preferably higher though.

Secondly, why pay somebody else to do something if you can do it yourself? I like having as many professions as I can. So you can just log an alt and just craft what you need rather than dig trough the auction house or hope a certain guild member comes online to do it for you.

Third, I was getting tired of Outland. My mage is 68 now, and pretty much done with nagrand. Blade's edge can be pretty frustrating without a flying mount. So I'll continue him later.

When WotLK comes around, a new profession will be added : Inscription. Depending on what skills will be added for it that apply to the crafter himself only, I may pick it up on my main, and drop engineering. Currently I can't really drop it as there's several rare patterns in my posession.

There's 3 miners but, the hunter will get Leatherworking later and the mage may get engineering at some point. It all depends on WotLK really. Until then I'm just preparing. 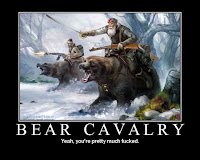 The guild managed to get a timed ZA done, and as such our bear cavalry has increased by "1". Now we know we can do it, but we haven't really bothered to do it again since. So the lucky player may well be the only player in Rampage until WotLK with a bear mount.

When WotLK activates, or more likely when blizzard releases patch 2.5 the bear drop will be deactivated in Zul'Aman and another item will take it's place. Bear mounts will be available again in the expansion, but they won't be brown. You'll get polar bears! How quaint.
at May 18, 2008

I played WOW for a long while (Lightninghoof, Horde, Troll Shaman), but am now moving on Age of Conan. Have you looked at that game?

Looked into it somewhat, but haven't really checked further than that. Doesn't seem like it's got all that I enjoy in a game. Plus i doubt my current PC can handle the graphics :P