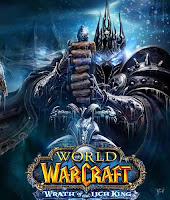 Looking for some more info on Wrath of the Lich King? MMOC and WoR letting you down? Look no further.

* Tap Tap, Pew Pew lists some info and links.
* Deathknight.info has early screenshots of the new interface, as well as info on the DK starting gear. Also some speculated Tier 7 helmets and shoulders. Also see this thread on their forums for the starting gear.
* Yet Another Warlock Nerf summarizes the warlock talents and some abilities.
* Warlock therapy summarizes as well.
* Wikidot lists enchants, images, videos, talents and more.
* Serious business on gameriot talks about the leaked notes.
* Wow-Wrath lists a number of updates fairly regularly at the moment.
* Tank hard! is among the many who believe the talents are fake.
* Draele warns you not to post about the alpha talents on the official forums. Or risk eternal banishment.
* Three Druid Noob summarizes for druids.
* Spooncraft talks about the 'leaked' talents.
* Misery also ponders the validity of the talents.
* Gweandar @ altitis writes about the current WotLK alpha hype and speculation around it.

Got some more interesting links? Just leave a comment. Anonymous posting is enabled and i've recently set up a comments feed as well.

My thoughts on the talents? Who knows, even if they are real "now" blizzard is working on the alpha test. (That's not even beta) Things are likely to change heavily still before you'll hear anything about a beta. All the info currently available is, if not touched by speculation, at least subject to change.

From what i've seen so far i'd say the enchants seem quite plausible, expertise will help us rogues a lot. The talents in some cases may seem overpowering but as with TBC this expansion will ensure that all the old content will become redundant. It wouldn't be surprising if the new talents will give your character a whole new level of strength.

All info on the WotLK alpha was deleted from MMoC, as well as WoR and the blizzard official forums. Ming's notes on gameriot was actually "deleted". If the notes were completely false they would probably have survived longer.

If the notes were completely false they would probably have survived longer.

I'm highly skeptical. Having fakes dealt with as swiftly as legit leaks saves a lot of time for the PR people to actually explain that the uber talent people are so worked up about has never been real.

Anyway, my own thoughts on the matter can be found here.

Hey nice list.
I recently stumbled upon the WotLK patch notes and posted it on my blog here