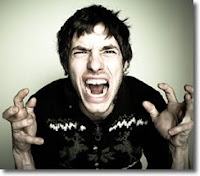 I told Examino yesterday that I'd do some venting today, so here we go.

Frustrations, annoyances, grief, emotions and all the usual riff raff you really don't want to deal with during raid time. It distracts from the ultimate goal you're trying to achieve that night.

Yet ultimately you'll end up having to deal with some kid who's got his panties in a bunch and intends to take it out on the rest of the raid, or worse, attempts to involve others into the whole "I'm right and he's wrong" argument. It won't occur every night, it might not even occur once a week, but once every while every guild will have one of those bad nights where you just wipe all night long on a boss that you've been farming for weeks.

Why? No reason really, a few people in the raid with a beer too many, one trialist too many, people getting themselves killed, DPS not waiting for tank aggro, hunters forgetting misdirects, healer distracted by people crying for heals on TeamSpeak or just random bad luck. There's plenty of things that can simply work against you in such ways that you'll spend all night biting nails or wanting to bash in somebody's skull in frustration.

But, it happens. And other than sucking it up, there really isn't much you can do about it.

Let's do a Top-X of most annoying things during raid time.

I sense much fear in this blog.

Seems your more unlucky while raiding then i am :)
We do have our bad nights but besides an overaggro now and then (which we will just laugh about) it's pretty relaxed and people invest in the raid/guild.

Then again there is always someone (a warrior, surprise!) who often doesn't want to raid but is "forced" to as we need him. The rest of the night he will make sure we know just how much he hates being there and rather be on backup (grinding dkp).
I'd rather see him go at times, it's a nice guy but the same old story over and over again... i'd be happy to be rid of that.

About the gquiting and not meaning it: we have no-return policy. When you decide to gquit, you're out.
Feel free to copy-paste our rules ;)
http://www.elysium-wow.net/forums