I'm sure it's old news for the most of you by now, but indeed Diablo 3 was the "special" announcement on Blizzard's World Wide Invitational. I doubt I need to tell you all the features myself as blizzard is quite capable of doing that themselves, so be sure to check out the 20 minute gameplay video, it will make you smile. Also see the FAQ.

Hello my friend, stay a while and... Now is not the time Cain. (/snicker)

Only 5 classes. Witch doctor and barbarian make two. And you can select male or female now, which is a great feature. I'd guess the sorcerer and amazon are likely to make their return again. Melee, Ranged and Caster were the primary classes in Diablo 1 and also present in Diablo 2. Druids in D2 sucked, the necromancer was fun but rather weak and the assassin sucked badly as well. So what would the fifth class be. Paladins again, or something new? Time will tell I guess. How about an evoker? Changeling? Maybe druids will be back after all.

Diablo, it didn't even have a number back then, was the first pc based RPG that I've played. The atmosphere when you entered the cathedral the very first time is something you'll never forget. Dark, creepy, mysterious. It set an amazing theme straight from the beginning of the game. I think I was still using a 33k6 modem back then.

Diablo 2 was released, obviously I got it, and the expansion pack as well. The game was good, and enjoyable, the atmosphere was there, but much different from it's prequel. Diablo was supposed to be a dungeon game yet D2 took place mostly in grassy fields, deserts, and forest jungles it just wasn't the same.
With new times came new internet, an unlimited and fast DSL connection. This opened up Battle.net, a free multiplayer network by blizzard and all that came with it.

Battle.net, while good in concept fails horribly due to the pathetic community of players that it houses. Scammers, ninja looters, hackers and more. Item duping, item hacks, fake items, there just wasn't really an end to it. And there wasn't anything that blizzard was doing about it. Why would they? You pay a one time fee for the game, and they give you the option to play the game across battle.net which is about where most support ends.

Diablo 1 had town kill PK, open PK, item dupes without needing software.
Diablo 2 had less hacks and software exploits, but dupes and hacked items were plenty around. Stone of Jordan anyone?
I'm sure Diablo 3 will be a great game, but since the game will allow single player mode, offline play, and open battle.net it's only a matter of time before every cheat that was available in Diablo 2 will find it's way into Diablo 3.

If blizzard wants to score big with Diablo 3, they'd have to set up an active subscription and GM system much like they have done in World of Warcraft. I don't mind paying some extra cash every month, if this means my game remains free of hacks, scammers and exploits.

I never gotten any of my accounts hacked, many people I then knew did though. This was a big failure in battle.net though understandable since it's hard to keep track of your friends otherwise. They sure tried though, I've logged on at times only to see a big red warning from battle.net : "108 failed log in attempts since you last logged on". It feels special. I wonder if the Blizzard anthenticator will be useable for your Diablo 3 accounts? 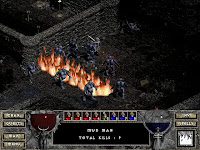 You got an item and apparently it's valuable.
How would you get some good value for it? Battle.net has a trade channel, oh jolly oh em gee. Is that it? Sadly, yes. A trade channel where about 200 people (if not more) are trying to spam (every single freaking 1-2 seconds) their wares for the lowest price, because obviously their stuff is the cheapest, best, non hacked item that you could possibly find. How much does your item cost? Only 40 duped Stones of Jordan good sir. /sigh

Alright, so you sell some stuff, got 20 SoJ on one of your half a dozen mule characters. Perhaps you even had two or three accounts. (Or 11, like me...) and you found what seems like a good deal. Somebody selling a lightning enchanted charm. (1-24 lightning damage 1 bag slot, if you don't know what I'm talking about, just go with it ok?) Or perhaps a grandfather (large unique gold colored sword). So you agree to meet the guy in a private game, he opens up the trade window and puts the item in there. You check it, and indeed it's the item. He moves the item around a bit (this is because of a certain hack which allowed players to put a "fake" item image into the trade screen), and at the last moment switches the item with a different low value one that looks exactly the same and presses 'ok'.

It's better than it was in Diablo 1 at least, there wasn't even a trade screen then. Just drop the item on the ground and hope the other player doesn't have a town-hack and can teleport or something. Which is one reason why I never really traded much, too much risk. I just made more accounts and stored anything and everything I ran into that was somewhat interesting. I had some friends that were the same, and we traded mostly among each other.


Free for all looting 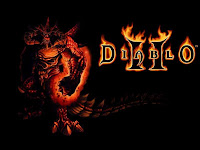 When I quit playing Diablo 2, I moved to Ultima Online, and after that to WoW. The biggest single most wonderful difference you'll notice when you move to WoW, is the loot system. No longer do you need to look around for a dozen minutes with your mouse in search for a ring which you're absolutely sure you heard fall somewhere like in Diablo 1. And no longer do you need to install click mods, roll a melee class to always be close to the boss when it dies, or pray your connection doesn't lag out when items start dropping. Indeed, in Diablo 2 when a boss dies he drops all his stuff on the ground around his corpse. Whites, grays, greens, blues, oranges, purples and artifacts. Everything ready for the taking for all the greedy piece of shit teenagers who populate battle.net.

The World of Warcraft group loot: need / Greed and master loot systems are great. Sure you can get people to roll need if they don't need something. But that's easily remedied with public shame or guilds. The free for all loot system from diablo however, is one of the main reasons I'm not looking forward to playing on battle.net again.

Diablo 3 had better have a group loot option.

In Diablo 1, if you died all your gear would fall to the ground. Good luck getting it back. That game was hardcore. Frustrating, but fun. It also gave a whole new dimension to player killing.
In Diablo 2, if you died, you spawned in town and had to run back to your corpse. Only your first corpse had all your stuff. If you got back a little, but died again on the way there, you were screwed. If you logged out your corpse would be just outside town though.
In Diablo 3, well, we can speculate but hopefully they will implement a "ghost" feature like world of warcraft has. It's for the best.

But still, one shall need to try it. Bring some world of warcraft buddies along, start a guild, play with friends, slay big demons, complete nightmare and hardcore mode. Ya know, for good old times' sake. Meanwhile Blizzard has learned a lot from D1, D2 and several years of World of Warcraft. Hopefully these new findings will help them make Diablo 3 a truly enjoyable game instead of the piss hole they turned D2 into. Just look at the recently created Diablo 3 forum and tell me what you see. A pitiful heap of annoying 12 year olds screaming at each other, /shudder. If D3's online component were subscription based like WoW is, this disgusting cesspool would decrease dramatically.

Speaking of guilds, at the release of D2 we were promised there would be guild halls and everything at some point. Perhaps they will be implemented into D3 properly? Would be nice.

I'm 100% sure I read somewhere that loot in D3 will be individual, i.e. everyone will see loot falling from the mob but for each person it will be just his own loot, not someone else.

As for battle.net hacks and all that crap, I always thought D2 was a good enough stand-alone game to be worth playing as-is, without the need for battle.net. I hope D3 will be the same. Sure it will be nice to play with a couple of friends on battle.net from time to time, but I'm not going to freak out over hackers and cheaters on battle.net - I just stay away.

Surely you have better things to spend your money on then another mmorpg subscription? If blizzard tag D3 with monthly prices I believe the fanbase will take a huge shock, and they will lose much respect.. D1 & D2 had no fee, so why D3?
WoW must be grossing insane revenue, I doubt they need another money sink right now.. Diablo is.. DIABLO :D and it better be free to play..

I doubt people wouldn't play because of a small fee. Say they make it 5.99 $ per month instead of a full scale mmorpg fee. So they can add GM support and active hack prevention.

I think the game would benefit a lot in terms of quality.

While Druids in D2 were comparatively weaker than the other classes they were still fun, and one or two builds were more than viable.

Most of the fun Necromancer builds were weak, but still fun. There were also viable choices if you wanted a functional high-end Necro.

Assassins sucked badly? My friend, you apparently never played an Assassin the right way then. Granted there were only two strong builds, but it was a very fun class and able to hold her own.

A lot of classes just didn't cater to a lot of people, but there were plenty of players that loved the classes that you think sucked. I was an avid Assassin fan. Trap, claws, whatever - good times.

I WOULD mind paying a monthly fee, even if it meant GM assistance and a stronger hack prevention team. The whole point of the game style is that even the most casual of people can play. 10 minutes here, 30 there, an hour later. No, just... no fee.

The big assumption/rumor is that D3 will have what-you-see-you-get loot style, like Mythos.

I liked corpse running, it added a bit of an edge to the gameplay. I'd rather have a fun small timesink ("oh sh*t oh sh*t, dodge, run run!") than some sort of dull moneysink (repair) or timesink (death penalty).

Again. No. You'd ruin the idea of the franchise if you went pay-to-play/subscription. Don't like the 12 year olds? Don't play with them... Like you said, get friends, make friends, join guilds.

And I for one would only buy the game if it had a fee IF the single player mode didn't require a subscription.

Seriously this is like a gateway drug to WoW and NO ONE can say otherwise.

Proof? WoW creators working on the game...original D1/D2 crew? Not hired because how would that be smart?


Also hacking is common on WoW servers more hack then you could imagine its just silent.