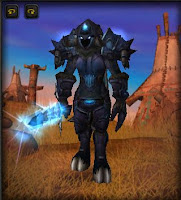 Is open, or rather closed. It's closed beta, but the NDA has been lifted. So you'll be seeing plenty of beta info pouring in trough the regular channels. This doesn't mean that deathknight.info will stop posting content, on the contrary. Deathknight galore The Beta patch notes have been released and posted in several locations. There's a new logon screen graphic. And even the starting cinematic Deathknights will be using a "relic" in their ranged slot. And they'll have a "death gate" spell which (much like druids) ports them back to their main trainer location. Ebon Hold in this case. Deathknights also get a rune system. No, not the three types of runes you were probably thinking of. A craftable rune which will act as a temporary enchant much like rogue poisons. Patch notes So, about those Patch notes. I'll list some of the interesting highlights.
at July 19, 2008