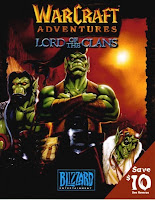 Other than Pax Imperia, and Warcraft adventures it's quite likely you've never even heard of them.
However, they were all developed by indeed, Blizzard. All the above games were halted halfway in development and other than Pax Imperia which was sold to THQ, these gems aren't likely to ever see the the inside of a store. Thus was revealed at the Dice-2008 conference.

Suprisingly Starcraft Ghost was not on the list that was published, however it's be very very quiet around this game lately, and it's even disappeared from the link list on the Blizzard front page so it's not quite off the hook yet. SC:Ghost was announced in 2002 and said to be targeted for Xbox, GameCube and PS2, but blizzard wasn't satisfied with the quality and has attempted to rewrite the game for the current gen consoles. Again however, blizzard was unhappy with the result and put the game into the fridge for now. Perhaps sometime after Starcraft II is released they will try to pick up on it. Until then, you'll have to wait for a fps game from blizzard a while longer, perhaps indefinitely. And as blizzard stated at the end of the conference "We deny everything", when questions were raised about SC:Ghost's current status.