While stealth is a well known art, only a true artist shall know no fame.

On the subject of stealth there are currently only two classes capable of this skill. Rogues and Druids, each with it's own unique set of talents. Both classes have some some comparable skills however.

* Master of Deception / Feral Instinct. Provides the player with up to +15 subtlety.
* Safe Fall / Feline grace. Reduces fall damage taken.
* Sprint / Dash. Increases run/walk speed for a short period.
* Sinister strike / Claw, a basic melee attack.
* Rupture / Rip. a finishing move that does bleed damage.
* Backstab / Shred, an attack from behind that does additional damage.
* Feint / Cower, an ability that lowers the player's threat.
* Ambush / Ravage, an attack from stealth with a high damage modifier.
* Cheap shot / Pounce, an attack from stealth which stuns the target.

You see, druids in cat form are more alike rogues than you might have thought previously.

Stealth works much the same way as any other skill in terms of levels. Base stealth skill is 300 at level 60, 350 at level 70. This skill level is checked vs another player or creature's level and detection skill which is also 5*his level by default.

A good example would be a human activating his "perception" skill to sniff out stealthed players near him. But there are more ways to increase your stealth or detection. 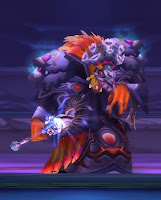 Stealth is great, and if used properly can save you some money on your repair bill. Tank died? Time to vanish. Sadly that doesn't really work on boss fights unless however unlikely you happen to be the last man standing. If you're an engineer like me this could even save your group some time by using the Goblin Jumper Cables XL and resurrecting a healer... well... sometimes anyway.

One thing to watch out for in instances (and some areas outdoor) is mobs with "stealth detection", mostly these will be dogs such as you can find early in BRD, DM north, black temple after supremus, several undead in stratholme, and many more places. While in stealth "always" keep an eye out for mobs with a teal colored eye symbol above their head. Mobs such as those basically ignore stealth and will attack you if you come into their normal aggro range. For BRD this isn't so much an issue, but if you aren't careful this will likely cause an untimely wipe for your Black Temple raid. I should know, it's happened to us often enough.

Stealthing past all trash mobs and going straight for a boss or other objective is an age old and practiced pleasure by many a rogue, in the case of some instance bosses however a single rogue might not be enough. Teaming up with a druid buddy or two in this case then produces a "stealth team". For example Sethekk Halls' last boss Talon King Ikiss drops several items which are very interesting for both rogues and druids.
* Shoulderpads of Assassination
* Ravenclaw Band
* Hallowed Trousers
* Sethekk Oracle Cloak
* Avian Cloak of Feathers
A normal SH run would take you upwards an hour or so, but by teaming up into a stealth team you'd be able to do the same run in 10-15 minutes. For hard hitting bosses you'll want to bring a druid to tank, a druid to heal and a rogue or druid for damage.

This is of course just an example (though functional), stealth farming can be quite fun and addictive and you'll find that there isn't really a limit to which instances can be completed in this fashion. You could farm for leatherworking patterns, enchanting recipes or specific boss drops in instances this way. Crowd control isn't really needed since you simply stealth past most crowds.