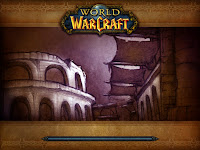 Ok average saturday evening, not much to do.
Karazhan was cleared this afternoon, 22 badges in the pocket for about 4 hours work. And a couple of guild alts geared up with epics. Business as usual.

I used the badges to buy myself the last bit of fire resistance that i needed : Inferno Hardened Leggings, mailed myself the libram from an alt, and went into BRD to get myself the diamond and Fiery Essence.
It took a bit longer than i figured it would, but after 4 resets i got 2 essences. One for myself and one for another guild member.

BRD is good for cash so, heck it wont hurt my finances.
I checked my key ring whether i had enough keys to open the 12 coffers in the vault, turns out i didn't yet. But i did notice that i didn't have the key to Dire maul yet.
I had to have it. I hearthed home and took the portal to Thunder Bluff, then flew over to Feralas.


Dire maul, for fun and profit. The stealthy way.

Ok, first the key. I got lockpicking maxed out, but collecting keys is like an odd fetish, i got to have them all. It's like friggin pokémon.

Dire maul east, northern door. Talk to the imp on the left and he'll run off. From this point off it's just a matter of stealthing after it. The large trees have a "huge" aggro circle, even while they'll be 8-9 levels below you they will still aggro at almost normal range. Weak things though.
Talk to the imp 3 more times or so and he'll flee upstairs where you can kill him.

Mission accomplished.
But, it's still saturday, and i'm still bored.

I'm here anyway, i might as well kill Lethtendris and her gImp companion.
Back in the days i've done a number of stealthruns to kill this bitch in the hopes of getting a [Felhide Cap] to boost my fire / shadow resistance for Molten Core, as well as the book for the fire resistance trinket.

Attack lethendriss, pop blade flurry, and she went down like a cheap hooker.

Highly anticlimatic.
But, it's still saturday, and i'm still bored.

You guessed it, since i'm here anyway....
Zevrim Thornhoof is just around the corner, and i figure i might as well do hydrospawn and Alzzin the Wildshaper as well then. 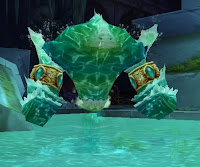 I went downstairs and went ahead at hydrospawn.
Not sure what he did, but he got me down to 5% health before he died.
Had to use vanish and wait two seconds for his add to despawn. Weird.

Drops :
* Some water elemental related junk = 10s
* Another green, blah. It actually disenchanted into a Large Shard though = 7g 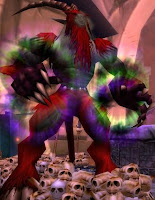 Upstairs on the other side, kill the stealthed demon on the way there, and face the boss.
Now, as you'll know from days long gone, this guy does a "sacrifice" ability, which will do quite a bit of damage. And with him hitting me would quite possibly kill me and end the attempt.
I equipped the pvp Medallion just in case and figured i'd try anyway.
It turns out that you can use Cloak of Shadows just as he's casting sacrifice.
Still, that's only 90% chance, so the pvp trinket is probably not a bad idea either.

Drops :
* Some crap blue > 7g shard
* [Foror's Compendium of Dragon Slaying]. Huh? Nice! It's got a retardedly low drop chance but there it was, funny as heck. We'll see what it sells for on the AH.

Back down, trough the garden, talk to the tree and enter the door.
Down the ramp, up the little stone, and jump down behind the boss.
Easy at level 60, cakewalk at 70.
The boss as i remembered summons adds at some pont, so save the blade flurry and other cooldowns until he does. Start off with garrote and pull him next to the wall. At 30% he changes form and the wall behind him breaks produces a horde of tiny little imps for you to deal with. According to wowwiki all the lashers in the room should also aggro you at this point, however they did not. (perhaps they will for you, don't know, but you've been warned) I'll tell you once again, blade flurry is a lovely skill, use it with relish.


So, DM east cleared.
As i was talking to a guildie trough whisper (It's not like farming DM in stealth requires 100% attention you know?) i came up with the silly idea to do DM north as well.
I was here anyway, it's saturday, i was bored.. you get the idea. 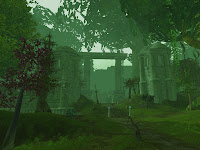 At lvl 70 this almost couldn't get much easier. Enter either of the doors and head straight west. Here you can grab the key from the box and enter the next area.
Now, you'll encounter some floating eyeballs with stealth detection. They still have the aggro circle of a normal lvl 60 however, so they should be easily avoided. On the right you'll see a goblin that's stuck to a metal ball. The key to these is a random drop from one of the ogres in this area, it dropped for me from the first thing i killed upstairs near the ogre tannin basket.

" It puts the tannin in the basket or it gets the hammer!! "

I couldn't loot the basket without aggroing the 4 creatures guarding it, but at lvl 70 that shouldn't be an issue. Just kill them.
If you set the goblin free you get some leatherworking / tailoring stuff. I got a recipe for [Pattern: Inferno Gloves]. No use to me, but it's 1g to the vendor.

Further upstairs you'll need to kill the two ogres guarding the door to reach the king's throne room. There will be a load of dogs with stealth detection, but like the earlier eyes their aggro range is quite limited so should be easily avoided.


The king & the observer 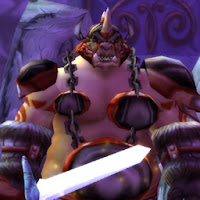 The king doesn't hit too hard ~400-500, nothing some extra stamina gear won't solve.
He also does fear and Mortal strike however, so watch for that.

The observer will ocasionally mindblast you for ~700, which adds up. Try to use Cloak of shadows to absorb at least one of those (Stick a /focus on him to keep track of his casts) and get the king down fast so the observer will switch to healing him and ignore you.

I used one healing potion when my health was getting low, but the king went down and Zurgat was the new king of the Gordok Ogres. /cheer

Not too bad.
Far from amazing profit though, but definitely fun for a change.