Most guilds got one of those "when's your birthday" threads on their forums, and Rampage is no different. Some were asked what they were hoping they'd get when it was their day and i remember telling them i wanted just 1 thing.
To get ourselves into Black Temple before that date.

And we made it.
I posted last tuesday that we'd killed Kael'thas, and then Rage winterchill the day after (on our free day even!). This thursday we killed Kael'thas for a second time in order to get another 5-7 people the needed Vial Remnant. Sadly the server decided to throw a fit and kicked half of the server offline shortly after entering Hyjal, so we didn't manage to get much further than that this week. But we'll be working on attunements and guild progress for the next few weeks. Everyone is quite happy we finally got rid of the cheap dressed hooker of Tempest Keep and his hoes and we're really looking forward to seeing some new encounters again.

But, speaking of birthday presents, i got mine a bit early i guess. 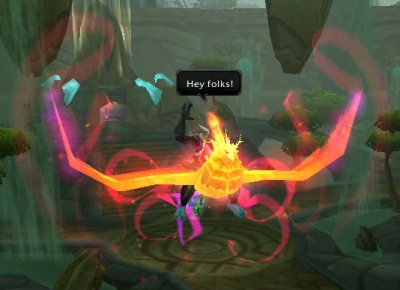 It was a pretty cool and unexpected bonus on top of a fun evening.
The main bonus is that it's a 310% increased flight speed mount, instead of the 280% ones i've been using so far. I could be topping the Primal Air farming market in no time !
Ofcourse you have to add the fact that it's only got a 1-2% droprate, and that there's only 2 other horde players so far who got one on our server, and you've suddenly got a pretty cool little package in your inventory. If it was a similar speed like the Tiger from ZA, or the horse from KZ i probably wouldn't even have bothered, but this thing is just plain amazing.

What will i be doing this monday you ask?
Raiding Hyjal ofcourse, with a piece of cake in one hand, a mouse in the other, and a headset on my face, what else would an addict wow player be doing on his birthday?
at January 25, 2008

didnt some guy in china pay 190k gold for one of those things? ballin mount tho.